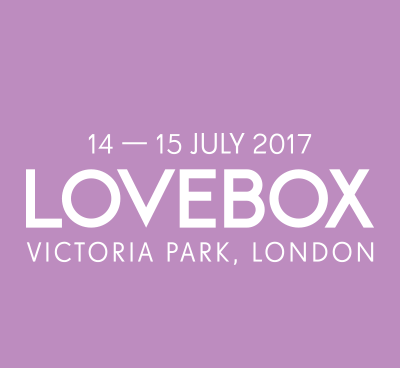 This landmark occasion calls for the best line-up yet, and Lovebox have delivered. Having already announced Friday’s headliner – the global phenomenon that is Frank Ocean – Lovebox unveils their second headliner, the explosive Chase & Status, and further musical programming.

Friday’s headliner, Frank Ocean, speaks for itself. The enigmatic singer-songwriter was catapulted to fame in 2012 with the release of his debut Channel Orange, which was greeted with universal acclaim. After four years of countless memes and think pieces about Ocean’s “disappearance”, questioning when his second album would arrive, it finally landed in 2016 in the form of a visual LP – Endless – followed by the album proper, Blonde. It was well worth the wait.

The Friday also sees one of the hottest producers on the planet, Jamie xx, open for Frank Ocean on the Main Stage. His debut album In Colour has been the soundtrack to our summer since it was released in 2015, and his new album with band The xx is an instant classic. Jamie XX says: “I'm looking forward to playing at Lovebox this year and sharing the stage with Frank Ocean who headlines directly after my set!”

Elsewhere on Friday is US rapper Mac Miller, whose latest, soul-infused album The Divine Feminine was lauded by critics upon its release, fast-rising star Rag N’ Bone Man, the runner-up in this year’s BBC Sound of 2017, and London synthpop trio Sälen.

The peerless Solange headlines the Noisey stage, fresh from the release of her landmark album A Seat At The Table. The younger Knowles sister’s third album was named by Pitchfork as their Album of the Year, and bagged her her first US No 1. February has also seen her win her first Grammy for Best R&B Performance for her stunning track ‘Cranes In The Sky’. This performance at Lovebox is set to be extra special.

Joining Solange on the Noisey stage is London’s own Sampha, whose distinctive vocals and confessional lyricism have propelled him to global fame. Initially emerging as a frequent collaborator of SBTRKT back in 2011, Sampha has collaborated with the likes of Drake, Beyoncé and the aforementioned Solange, and released his highly anticipated debut album Process in 2017.

Elsewhere on the Noisey stage is the talented super-producer Kaytranada, who we’re thrilled to welcome back to the Park to perform tracks from one of the best albums of 2016 – his debut LP 99.9%. His affiliate Mick Jenkins will also appear – the rising US hip hop artist released his dazzling debut album The Healing Component in 2016 – as well as BBC Sound of 2017 winner Ray BLK and rising star Rex Orange County.

Lovebox are thrilled to welcome fabric back for their second year in the Park as a festival exclusive. The news is all the more exciting considering the iconic’s club loss of license, which thankfully they have now won back after outcry from the global music community. London wouldn’t be the same without fabric, and we’re glad they’re back and bigger than ever. fabric say: "Lovebox gave us the perfect entry into being part of a festival last year and it left us wanting more. To be invited back to build on the foundation we made in 2016 is a prefect to develop something bigger and better than last year across the weekend. Expect something different to last year but with the same calbire of artists and our exclusive audio partner Pioneer."

fabric have programmed a fittingly explosive lineup to mark their festival return. Arguably one of the best DJs on the planet, the inimitable Seth Troxler headlines the Friday. Raised in Detroit, the house and techno master will bring a flavour of Chicago to the Park. Preceding Seth will be Bicep, playing their trademark mix of obscure anthems and club classics spanning a kaleidoscope of genres. Elsewhere, there’s experimental producer KiNK performing a live set, disco master Hammer, and fabric resident Terry Francis.

Finally, Lovebox are extremely excited to introduce a brand new structure for 2017. The Transistor stage will resemble a giant radio set, and feature explosive flame pyros throughout the day – it’s not to be missed. Taking over Transistor on the Friday are Abode, the deep house promoters running the hottest nights in London. Headlining Abode will be the reigning king of underground house, Eats Everything, who will be joined by Hot Creations rising star waFF, the dynamic Jack Swift, and B2B sets from Will Taylor and GW Harris, Ellie Cocks and Jimmy Switch, and Artikal and Lindsey Matthews.

Saturday’s headliner comes in the form of one of the UK’s best live acts, and a Lovebox favourite. Chase & Status’ ferocious live sets are truly a sight to behold, whether they’re storming through classics from their 2008 debut More than Alot or the bestselling homage to 90s dance, Brand New Machine. 2015 saw the release of EP London Bars, featuring some of the UK’s finest MCs, and their much-anticipated fourth album drops this year.

Expect new material, a brand new show and extra special guests at what is set to be a masterful headlining slot – which was unveiled via a mysterious social media campaign and a billboard portraying a countdown hangman spelling out ‘Lovebox’ in London. Chase & Status say: "We’re blessed to be back headlining Lovebox again. It’s always special playing at home in London & at such an iconic festival."

Lovebox also welcomes Jess Glynne to the Park. One of the UK's most promising pop talents, she originally found fame lending her distinctive vocals to chart smashes such as Clean Bandit's 'Rather Be' and Route 94's 'My Love’. Jess introduced her own sound with the release of her 2015 debut album I Cry When I Laugh. With a follow-up scheduled for release in 2017, this year looks set to build on Jess Glynne's solid reputation as one of the best on the scene. Also on the Saturday is rising star Anne-Marie, whose infectious singles ‘Karate’ and ‘Do It Right’ have led to her being nominated for British Breakthrough Artist at the Brits.

Lovebox favourite Annie Mac will also be back in the Park, and R&B singer Raye plus rising four piece Club Drive will also perform.

Over at the Noisey stage, there’s the most fierce of UK talent, both rising and legendary. DNB icon Andy C headlines, and the RAM Records co-founder is set to destroy his slot. Andy says "First time at Lovebox! Heard some amazing things, I can’t wait to get involved!"

Joining Andy C are comedy rap crew Kurupt FM (stars of the BBC hit show People Just Do Nothing), as well as respective performances from two fast-rising grime MCs – Birmingham’s Mist and London’s AJ Tracey – both deservedly much-hyped in their own right.

For the grime fans there’s a special showcase from XL Recordings. New Gen continues the theme of fresh homegrown talent on The West Stage. This performances follows the compilation album of the same name, which features contributions from the scene's rising stars (Ray BLK, Kojey Radical).

fabric’s Saturday lineup is equally as stacked as the Friday. The legendary Ricardo Villalobos returns to London to head up the billing. Elsewhere, returning to Lovebox after last playing back in 2010, is Berlin’s Dixon (who came No 1 on Resident Advisor’s Top DJs 2016 Poll), Bunker resident Mike Servito, and fabric’s own Craig Richards.

On Saturday Transistor will host a lineup featuring some of the finest names in techno. The multi-faceted Kölsch is set to headline, and will be joined by Richy Ahmed, Jamie Jones, Jesse Rose, Solardo and Lewis Boardman.

It wouldn’t be a celebration of 15 Years of Love without some Lovebox favourites on the decks. Norman Jay MBE, Jazzie B OBE, Horse Meat Disco will all be appearing across the weekend.

Aside from the electric musical lineup, Lovebox will also play host to its trademark assortment of eclectic experiences to discover, including the tastiest street food from some of London’s best loved vendors, fashion and beauty boutiques, walkabouts and the little things that make Lovebox.

There will, of course, also be the Lovebox VIP area…more details to be announced soon but expect an exclusive lineup and a brand new theme for 2017.

All this is just the first wave of acts to be announced for Lovebox…with more on the way, Lovebox are set to celebrate their 15th year anniversary in style.