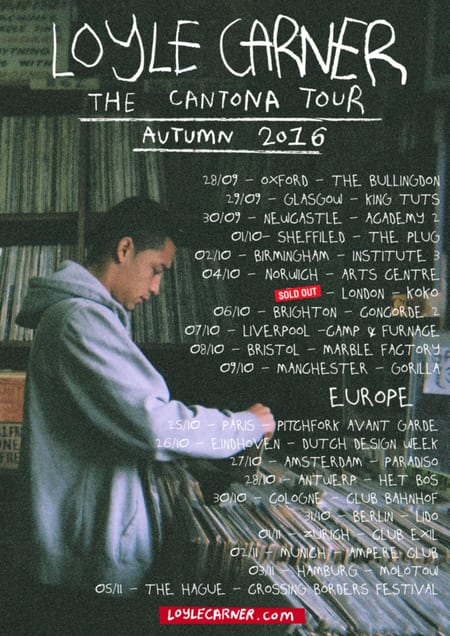 21-year-old South Londoner Loyle Carner has today announced a run of ten shows across Europe this October/November, following his UK headline stint which will see him perform at a sold out London KOKO. Loyle Carner's 'The Cantona Tour' will now cross the channel, stopping first in Paris for Pitchfork Music Festival before visiting Eindhoven, Amsterdam, Antwerk, Cologne, Berlin, Zurich, Munich, Hamburg and The Hague. Tickets will be on sale from tomorrow.

Loyle Carner recently dropped his new single 'NO CD', which was premiered on Annie Mac's BBC Radio 1 show. The 'NO CD' video, which features a host of friends, family and contempories was directed by rising director Alessandra Kurr and will be released via AMF Records.

'NO CD' is pure unadulterated hip-hop and shows off Carner's and longtime collaborator Rebel Kleff's immense skills as MCs – the pair are both rhythmically versatile and intellectually astute. Carner’s music is planted at an intersection between the boom-bap of East Coast hip-hop, jazz-inflected portraits of South London, and soulful, laid back poetry; there’s solid, honest and raw sentimentality running through his sound.

Over the last 12 months Loyle has released a stream of insightful and erudite tracks to critical acclaim including his debut ‘A Little Late’ EP and singles ‘Aint Nothing Changed’ and 'Stars and Shards' which were added to the BBC Radio 1 'In New Music We Trust' playlist. Carner also made the esteemed BBC Music Sound of 2016 long list; the annual industry poll tipping a selection of artists destined for big things as well as collaborating on tracks with Kiko Bun, Cadenza, Tom Misch and Kate Tempest.

Having grown up with ADHD, Loyle Carner recently set up a cooking school with Goma, a collective of young creatives and Get Stuffed catering company for fellow sufferers aged 14-16 (Loyle felt cooking helped him immensely when growing up). The process was documented, which you can watch in this moving film.