LUNAKAI kicks off 2021 with new single ‘ALL IN’, released today through his Masters of Nowhere label.

‘ALL IN’ is an intimate recording bringing together LUNAKAI’s hypnotic vocals, lo-fi guitar and a stripped back beat. The track is a unique take on electronic alt-pop whilst being ready to give listeners that adrenaline rush when dropped late night at any festival of worth. ‘ALL IN’ takes you on a ride through a melancholic yet optimistic side of LUNAKAI’s sound. The track has already received airtime on ‘Diplo & Friends’ show on BBC Radio 1.

LUNAKAI explains:“When I was making this it all came together in about 30 minutes; the verse melody and the vocal hook. I was thinking I’d give it to someone else to re-sing but I freestyled these lyrics without writing them down and in the end the vocal had such a vibe I ended up using that first scratch vocal take.” ‘ALL IN’ follows LUNAKAI’s debut single ‘YOU’, with both tracks appearing on his self-titled debut EP, out next month.

The music video for ‘ALL IN’ encompasses LUNAKAI’s artistry; the London creative directed, shot and edited the visual himself. Shot in Tokyo, the engrossing video was filmed during LUNAKAI’s trip to the Japanese capital and is his first attempt at filmmaking. “This is the first video I’ve made. The whole process was a massive learning curve and delved into creative exploration.” he adds. “I have a keen eye for visuals from my photography, which I do alongside my music and have shot for Vice, Tame Impala, Diplo and even shared spring rolls with Raekwon before shooting his portrait.”

LUNAKAI is the music moniker of Kyle Ross, a London-based multidisciplinary artist who has produced records for Diplo and Robyn collaborator, Maluca. He has also remixed tracks for Drones Club (PMR) and Chela (Kitsuné), pitched compositions for TV spots for Nike and Adidas and worked with artists such as Yussef Dayes, Ashnikko, TALA, Litany, Pauli The PSM (Sampha, FKA Twigs)  and AMA (Dirty Hit, Polydor).

LUNAKAI’s second single is a remarkable taste of what’s to come from his debut EP release, slated for release 26th February 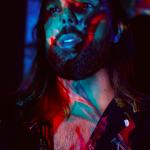