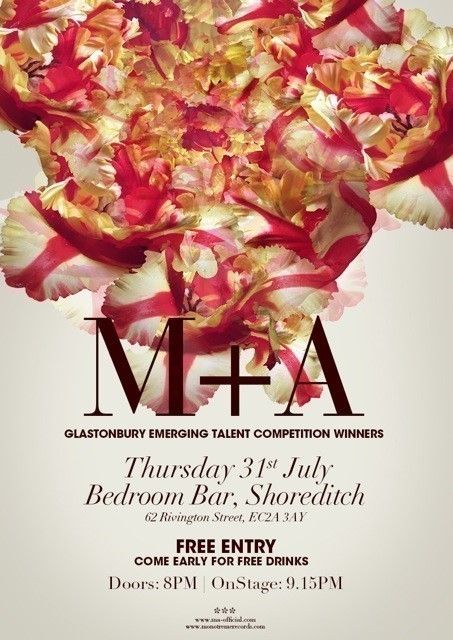 Glastonbury Emerging Talent Competition winners and Guardian’s New Band of the Week M+A play an intimate show at Bedroom Bar in Shoreditch on Thursday 31st July to mark the release of their upcoming single ‘When,’ out August 4th on Monotreme Records.

The Italian duo were handpicked by Michael and Emily Eavis to make their Glasto debut on the West Holts Stage last month alongside M.I.A, Goldfrapp and Disclosure. They also played a secret set backstage right after Bryan Ferry and The Rabbit Hole on the Sunday to round off a trio of performances at Worthy Farm.

‘When’ is taken from last years ‘These Days.’ Released last September, the album cleverly combines sunny, European dance-pop and laid back electronic vibes with a soulful twist. Think a young Beck channeling Phoenix at a Brazilian Rave organised by Friendly Fires!