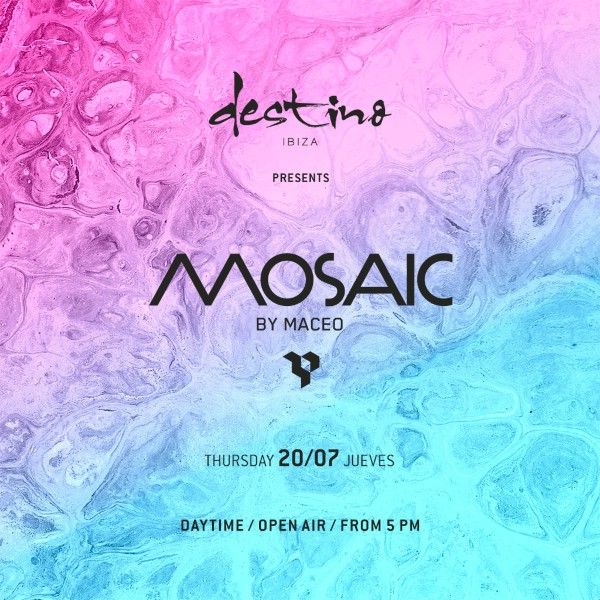 For an al fresco party in the sun, make sure to have Thursday, July 20th marked in your island calendar, as Talamanca’s Destino will play host to Maceo Plex’s unique musical experience, Mosaic by Maceo, for an exclusive daytime event.

Having opened in 2013, Destino, Ibiza has quickly become an Ibizan landmark for daytime experiments in music, with breathtaking views of Ibiza Town and the distant island of Formentera floating in the aquatic horizon, this enchanting destination has previously hosted the likes of Solomun, Sven Väth, Guy Gerber & Luciano to name a few.

The acclaimed DJ and producer Maceo Plex has established himself immensely on the white island, with his forward-thinking and future-molding residency Mosaic by Maceo confirmed at Pacha each Tuesday until the 3rd of October. An exciting summer lies ahead for this innovator as he is soon to release his long awaited studio album ‘Solar’, The 11 song masterpiece is a vibrant blend of dark and visceral sound scape's that journey through an eclectic mix of electronica, dub, breakbeats and techno. This captivating compilation embodies those classic Maceo Plex vibes all the while moving the auditor into an unexpected and exciting listening experience.

With the line-up yet to be announced, Maceo is renowned for being accompanied by a solid selection of heavyweight sound smiths such as: Nick Murphy f.k.a. Chet Faker; Adam Beyer, Carl Craig, Ben Klock, Henrik Schwarz and making their island debuts: Jon Hopkins, Palms Trax & Röyksopp, are all confirmed for his imaginative and innovative series at Pacha this season. We can assure you this day will be one inconceivable affair not to be missed.