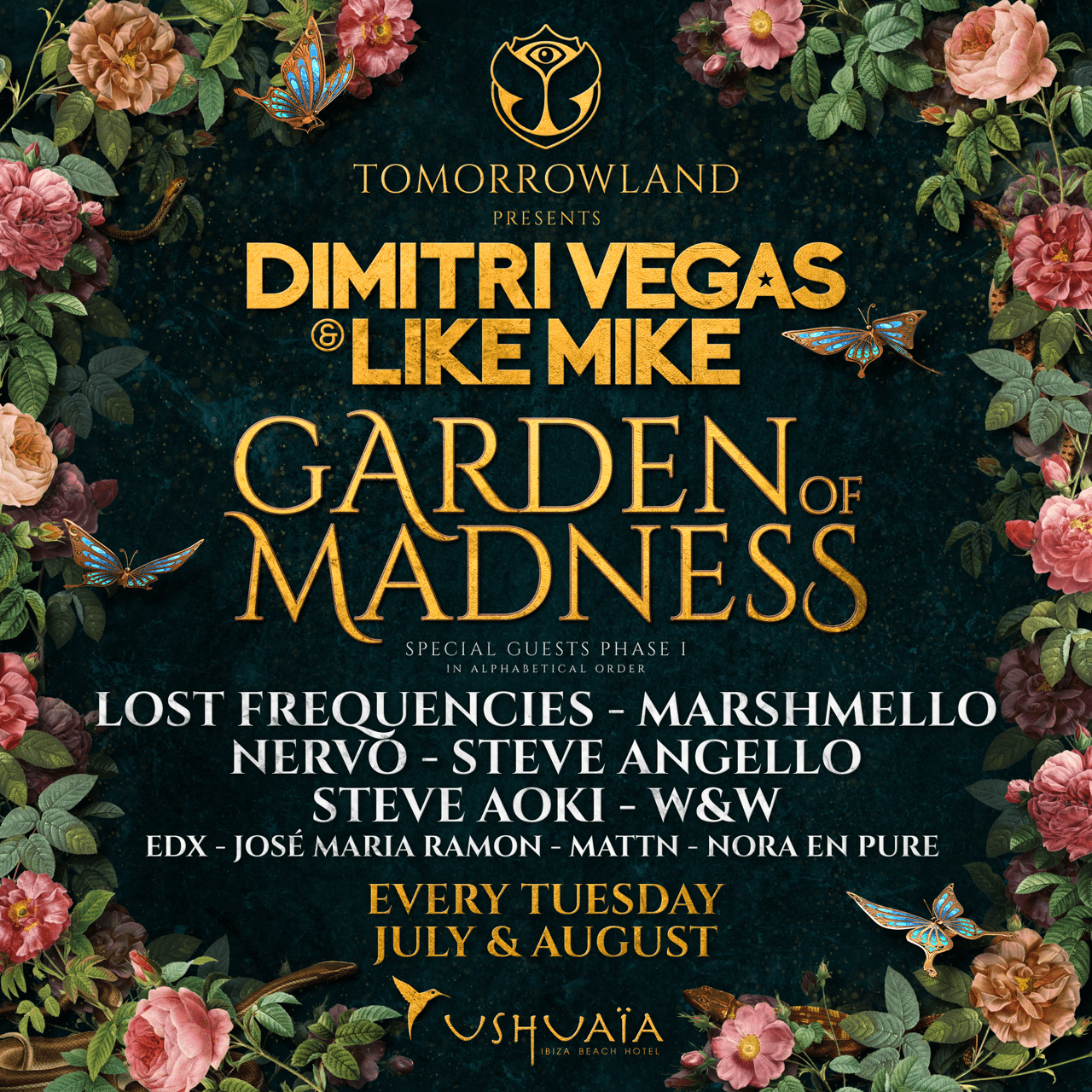 After the announcement of Tomorrowland and Dimitri Vegas & Like Mike’s latest joint venture, ‘Garden Of Madness’, excitement has been mounting, and with news of the parties full line-up, fans are set to reach boiling point at the prospect of such superstar names performing. Dimitri Vegas & Like Mike will be joined by the likes of Special Guest Marshmello, multi-platinum hit maker Lost Frequencies, as well as a whole host of A-list DJs and Producers withSteve Angello, NERVO, MATTN, W&W, Steve Aoki, Nora En Pure, EDX and many, many more still TBA, over the course of what is set to be another unforgettable Ibiza season.

Speaking about their first ever Ushuaïa Ibiza residency Dimitri Vegas & Like Mike said: “Anyone who has ever been to Tomorrowland will know what to expect from our sets and the festival team’s creativity! And anyone who has ever been to Ushuaïa Ibiza will also know the attention to detail that goes into one of their Ibiza parties. So what we’re going to be bring to the island this summer is something that no one will be expecting! Together we’re going to create something more surreal, more insane and more exciting than anything ever hosted on the island before!”

Whilst Ushuaïa Ibiza is known for its exuberance in party creations and since its launch back in 2011 has treated the beautiful island of Ibiza to some of its finest musical moments. The collaboration with the production team fromTomorrowland, who have literally redefined the electronic music festival landscape, is a partnership that will bring to the renowned beach club destination a custom-built stage that will deliver an incredible extravaganza for those lucky enough to experience it.

Responsible for the smashing the biggest festival’s main stage each year, Dimitri Vegas & Like Mike became an inherent component of its phenomenal appeal and have in turn earned legions of fans around the globe. Their phenomenal global reach has seen them expand their ‘Bringing The Madness’ arena show into an 84,000 person event that sells out in minutes, play every major dance music festival going, become two of Ibiza’s most popular DJ’s over the past few years, collaborate with the likes of Ne-Yo, Steve Aoki, Diplo, David Guetta and more recently Hans Zimmer (for an official Pirates of the Caribbean track), and become the first ever duo to be namedWorld #1 DJ in the DJ Mag Top 100 Poll.

With the summer season now in full swing, Ushuaïa Ibiza Beach Hotel is proving once again why their legendary poolside parties see fans flock from across the globe for the full Ushuaïa experience. With a state of the art soundsystem, the highest levels of production, pyrotechnics, gogo dancers, confetti, streamers and much more, every night of the week boasts a superstar resident and totally different musical and artistic concept, making these some of the hottest parties on the planet.