MACKLEMORE & RYAN LEWIS, MARK RONSON, THE 1975 TO HEADLINE ‘WE THE FEST’ 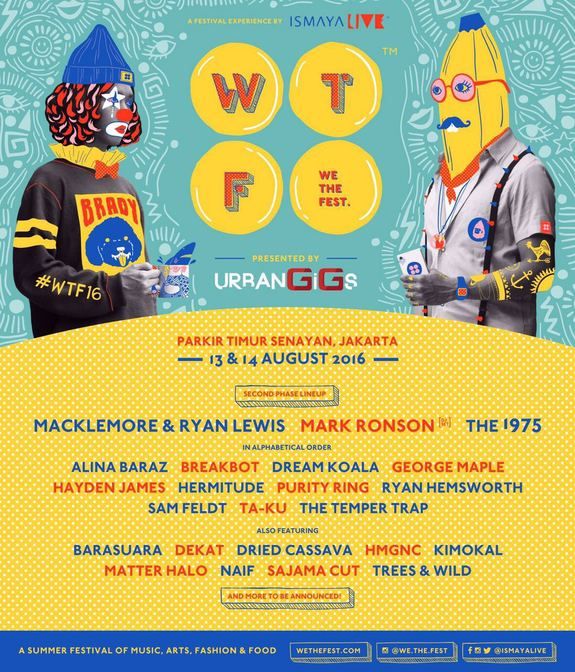 MACKLEMORE & RYAN LEWIS, MARK RONSON, THE 1975 TO HEADLINE ‘WE THE FEST’

On the 13th and 14th August 2016, WE THE FEST opens the doors to Indonesia’s vibrant party capital, Jakarta, for a truly unparalleled immersive musical experience. A spectacular celebration of music, arts, fashion and food, boasting a lineup brimming with some of the hottest contemporary talents across the pop, rock, indie and electronic spectrum, WTF is the party to be seen at this summer and is an undisputed jewel in the crown of South East Asia’s burgeoning party calendar.

Headlining the festival this year, at Parkir Timur Senayan, Jakarta, are none other than Grammy award-winning pair, Macklemore & Ryan Lewis, who have chosen WTF as the fitting finale to their mammoth 2016 world tour. Soaring to prominence with chart-topping records including ‘Thrift Shop’ and ‘Can’t Hold Us’, Macklemore has since established himself as one of pop music’s biggest modern icons. Fellow hit-making machine and mastermind behind the ‘Uptown Funk’ phenomenon, Mark Ronson, will also be on headline duties, bringing one of his famed genre-defying DJ sets to the backdrop of Indonesia’s most vibrant city. Last, but by no means least, alternative British rock outfit The 1975 will be taking to the coveted WTF Main Stage, as they too look to provide fans with a headline performance to savour in the memory.

The Temper Trap and Hayden James give even further depth and diversity to the already eclectic lineup, as do French ‘nu-disco’ pioneer Breakbot, Canadian synth-pop duo Purity Ring and Dutch “deep house superstar” (Billboard) Sam Feldt. Making her Indonesian debut is London-based singer-songwriter George Maple, whose collaborations with the likes of What So Not and Flume have made her an outstanding addition to this year’s event. Australian producer Ta-ku, whose down-tempo re-imaginings of tracks from Maple, Justin Timberlake and Flume, is another must-see act on what is undoubtedly WTF’s strongest billing to date.

For the full lineup so far, head to wethefest.com and stay tuned for more acts, due to be announced soon.

Weekend tickets, starting at $54, are available now here. See below for full details, or head to wethefest.com

A labour of love since its inception two years ago, WTF has rapidly expanded from a local one-day event into a groundbreaking two-day extravaganza, welcoming attendees from every corner of the globe. A hotbed of international and homegrown musical talent, the event is also renowned for welcoming figureheads from across the cultural spectrum. In 2015, Australia’s ‘Masterchef’ George Calombaris served up his award-winning Greek dishes to hungry punters, while magician, comedian and stunt man Wes Barker enthralled the crowds with his unique combination of stand-up comedy and magic.

This year, festival-goers will also be able to follow the latest trends from top brands and bloggers in the fashion area, absorb themselves in the art installations and graffiti around the site, brush up their skills in workshops in the artist village, or simply kick back and indulge in some of the delectable dishes that the Ismaya Food Town has to offer.

A cultural oasis in the midst of the bustling capital, whether it’s a family day out or a chance to party with friends, WTF offers up a diverse array of unrivalled immersive experiences for all ages to partake and enjoy.

Tickets are now on sale online at www.wethefest.com, Bobobobo, Tiket.com, Raja Karcis, Karcis.co.id, Goers, and Monstore. Tickets are available via offline at convenience stores such as Alfamart, Alfamidi, Lawson, and 7-Eleven, as well as Panorama Tours.