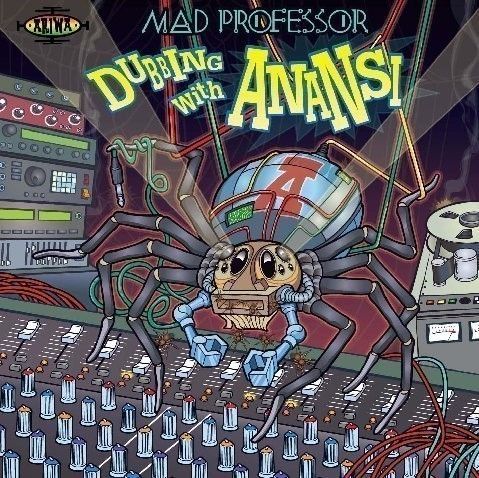 The enigmatic and prolific Mad Professor releases his lead track ‘Atlantic Crossing’ from his latest album ‘Dubbing with Anansi’, available from 23rd February 2015 on Ariwa Sounds.

Neil Joseph Stephen Fraser earned his title at an early age, when his 10-year-old self amazed friends with his penchant for experimentation by building a radio and telephone system. This fascination with electronics, along with a love of Motown, Philadelphia International, Treasure Isle and music of all types, propelled his career from its infancy and continues to inform his work to date.

A disciple of Lee “Scratch” Perry, by the early 80s he had built his own mixing desk and launched Ariwa Sounds from his front room in Thornton Heath. Early recognition of his talent by the likes of John Peel only expanded through the succeeding decades, and his growing reputation warranted him collaborations with the likes of Sly and Robbie, Pato Banton, Jah Shaka, and Horace Andy, as well as work with artists outside the realm of traditional reggae and dub, such as Sade and The Orb.

However, it was with his remixing of Massive Attack’s second album, ‘Protection’, in the mid-90s that his profile really increased to legendary status. ‘No Protection’ was instantly received by all corners of the globe and saw him benefit from a Virgin/EMI international launch pad.

Now, his new LP celebrates the African/Caribbean folk hero Anansi, one of the few fictional protagonists to survive the Atlantic crossing during the slave trade, and the transition made from free, African citizens to exiles in the western world. During a time when to speak in one’s native tongue was strictly forbidden, Anansi and the dubby, percussive, African melodies lived on. Mad Professor takes inspiration from the strength of the half man, half spider, Anansi, but also from the strength of the people who ensured his legend lived on.

Mad Professor utilizes new and experimental audio tricks to create a dazzling dub album, employing melodies that take you from West Africa to the Caribbean. The record expands on the dub sound that the producer has skillfully crafted over the past three decades, developing tracks that match the quality of his impressive back catalogue. Instrumental jams ‘Atlantic Crossing’ and ‘Rebels Gathering’ set a precedent of flair for the rest of the album, before incorporating the vocal talents of Brother Culture, New Flower, Delroy Williams, Vivian Jones, Vivian Dour, Frankie Paul, and Mad Professor himself, marking a masterful progression of smooth, solid dub.

This track is a taste of what you can expect from next year’s release – ‘Dubbing with Anansi’ – which is set to be a magnificent addition to Mad Professor’s already towering discography, cementing the talents of an artist who just keeps giving.