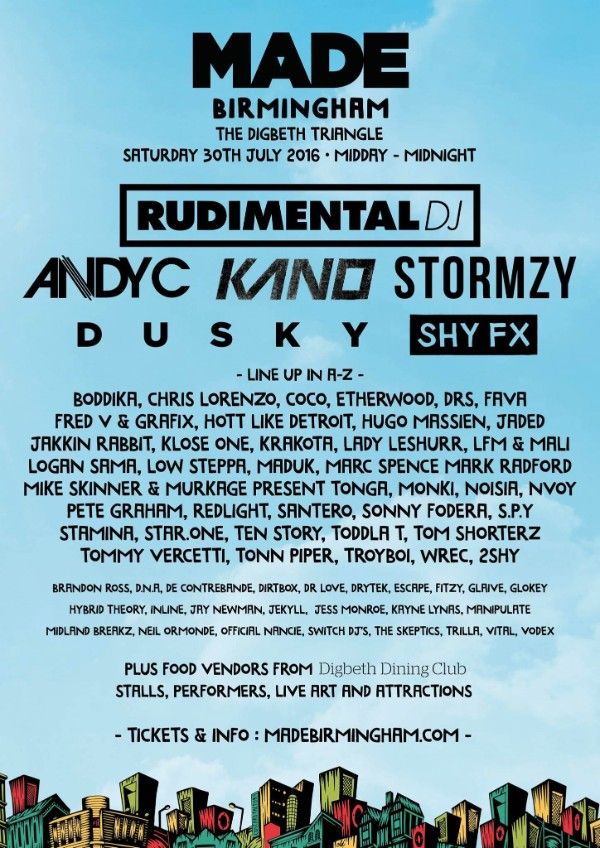 Birmingham’s own metropolitan festival goes major this year in the key of even more bass and urban must-sees, with MADE… My Night also announcing names for the after party to follow this 29th – 31st July. With massive artists already topping a bill amassing enough talent to still not be top-heavy, including Rudimental (DJ), Stormzy, Andy C, Kano, Dusky and Shy FX, the fourth phase adds extra weight to the UK’s most solid city festival. This while various venues due to be unveiled near to the Digbeth Triangle festival will host the latter night festivities, promising to be as much a vantage into urban culture as the famed MADE complex.

The Nonplus Records boss Boddika brings his trademark D&B-based techno to bear, filtering into the frequencies found across the festival. With a reputation upmost in underground from some of the tops records of ‘UK Bass’, the Joy Orbison collaborator blows up crowds and scene alike. Two trendsetters of urban reconfirm MADE’s street style, with Grime guardian Logan Sama and cross-genre top boy Toddla T. Logan Sama has championed the careers since conception of Grime’s godfathers, rising to prominence on Rinse FM and on to Radio 1xtra as the scene became dominant. Toddla T has for years been a firm feature of Radio 1 who regularly works in studio with the artists he represents on air, with the credit of a close connection to stars of the city scene himself.

So far the returning MADE… My Night can confirm primary parts of its biggest after party to date: two rooms each lead by Knee Deep in Sound and Speedy Sonics. UK House honcho Hot Since 82 claims the rights to room 1 after an acclaimed tour of his titular project, to the tune of fellow on-fire DJs Davide Squillace and Sidney Charles. Room 2 is a low-end function equipped for highest heights with the most on-form DJs, Birmingham local Cause & Effect, Culture Shock, Preditah, Friction and Slimzee. Expect a knee deep crowd on the dancefloor for these sonics, with details yet to come.