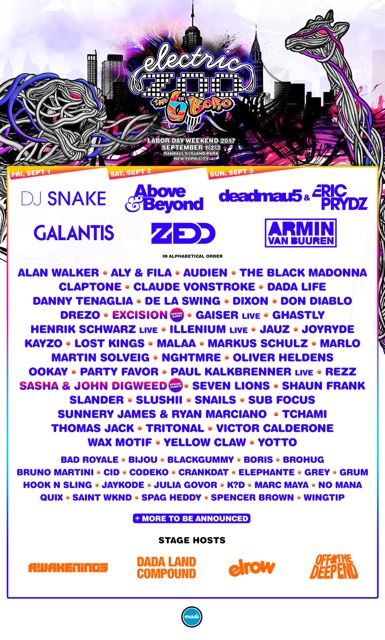 MADE EVENT, producers of the Electric Zoo Festival have announced today (4/27) the Phase 2 line-up of ELECTRIC ZOO: THE 6th BORO.

After releasing its initial star-studded lineup for its ninth turn–helmed by DJ SNAKE on Friday, September 1, ABOVE & BEYOND on Saturday, September 2, and a back-to-back set from deadmau5 & ERIC PRYDZ on Sunday, September 3–Phase 2 continues the momentum, welcoming over 40 more acts that include fan favorites Armin Van Buuren, Galantis and Zedd.  The additions bring to the festival an array of sounds from the deeper side including The Black Madonna, Dirtybird head honcho Claude VonStroke, the mysterious Malaa, Resident Advisor’s Top 100 DJ Poll winner of 2015 and 2016 Berghain resident Dixon and recent up-and-comer favorite, K?D.

Along with the Phase 2 lineup comes the announcement of two hosted stages:  Swedish duo Dada Life with their “no rules but the rules of Dada” trademark, The Dada Land Compound festival stage and JAUZ with Off The Deep End–his dedicated series for die hard fans.

Taking place over Labor Day Weekend September 1-3 at Randall’s Island Park, the theme of ELECTRIC ZOO: THE 6th BORO is a homage to the festival’s hometown that will sparkle with the surreal, dazzle with imagination and envision New York City in a way never thought possible. Many of the world’s heralded and cutting-edge DJ acts will be featured among all-new stage designs, interactive performers, unique installations and more.

Spotify has launched a special playlist dedicated to ELECTRIC ZOO: THE 6th BORO at: http://spoti.fi/zoo