MADE Festival Announces Second Wave Of Artists And Partners 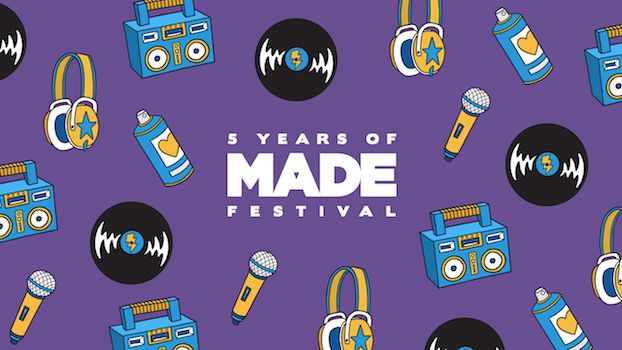 MADE Festival Announces Second Wave Of Artists And Partners

The MADE Stage, main stage forms the outdoor centrepiece of the event and will see a host of popular live acts and DJs, with one of Birmingham’s most successful electronic music producers and DJs, Chris Lorenzo, making his main stage debut this summer. The internationally acclaimed musician is joined by one of the region’s hottest new DJs, Nathan Dawe, whose recent sell out show at the O2 Institute in Birmingham heralded the arrival of this exciting new talent. The MADE Stage is headlined by one of the UK’s most iconic music stars Dizzee Rascal, Garage music legend DJ EZ, BAFTA award winning Kurupt FM, and UK Hip Hop and Afrobeat stars, Yxng Bane and Not3s.

RAM Records will host an arena at this year’s event. Andy C’s evergreen label recently celebrated 25 years at the top of Drum and Bass music and the head honcho himself will headline an all star cast. Joining him will be Welsh superstar High Contrast, and the powergroup of the genre SASASAS whose past 12 months have seen them take the MC-led DnB scene to new heights. Ram Records heavyweight artists Dimension, Culture Shock, Rene Lavice and Sound in Noise complete the bill.

Local club brands 02:31 and Portal are the chosen hosts for the third and fourth stages at the festival this summer. With a continued focus on celebrating the musical and creative talent within the second city, MADE Festival is proud to present two of Birmingham’s most influential promoters as part of the diverse musical programme.

The 02:31 Stage welcomes an exciting mixture of Bassline, House, Garage and Grime and will be sure to bring smiles to the party people of Birmingham. Coventry’s Holy Goof headlines alongside DJ Q, an artist at the forefront of the scene for over a decade and one third of Bass Music trio T.Q.D, and Preditah, another of Birmingham’s finest who has produced and remixed for Boy Better Know (Skepta, JME, Wiley), Jessie Ware and Disclosure. DJ Zinc will take the crowd down memory lane for one of his “Trust Me, I Was There” sets, BBC Radio’s Grime and Hip Hop aficionado Sir Spyro and Bru-C also perform, and local hero and man behind 02:31 parties Tom Shorterz will be sure to keep the regular crowd happy!

Portal is established as one of the UK’s best known and appreciated House music event brands and their Birmingham shows have become more and more popular over the past couple of years. Camelphat, responsible for the chart topping hit ‘Cola’, headline the stage, and are joined by Detlef and Latmun for a very special back to back set. The Tech House duo have collectively released on labels such as Hot Creations, Toolroom and ViVa, and are two of the UK’s hottest properties in the house music world. Max Chapman’s rise and rise has seen a string of popular releases and international bookings, resulting in his recent debut at the helm of Pete Tong’s essential mix. Max is joined by Australian professional surfer turned producer/DJ Fisher, part of Claude VonStroke’s Dirtybird collective, who makes his UK debut tour this summer with MADE Festival at Perry Park a highlight.

Held in the streets of Digbeth for the last four years, MADE Festival relocates to one of Birmingham’s most famous and impressive green spaces, Perry Park, to mark a new era for the city’s biggest music event. Perry Park, in Perry Barr, is the home of international athletics track, Alexander Stadium, and will be the centrepoint of the Commonwealth Games in 2022. At only around 10 minutes by train from New Street to Perry Barr, or 10 minutes in a taxi, Perry Park maintains MADE Festival’s local roots but gives the opportunity for an even bigger celebration of music and the modern street culture of Birmingham, in a safe and secure environment.

The independent festival, operated by Weird Science Group, and showcasing them at their best, promises bigger and more exciting production, combined with some of Birmingham’s best visual and street artists, designers, set builders and award-winning street food vendors.

MADE Festival has consistently proved itself to be Birmingham’s leading festival and its commitment to showcasing boundary pushing music in all its guises has been the cornerstone for each previous event. Previous performers have included Rudimental, Annie Mac, Stormzy, Chase & Status, Giggs, MK, David Rodigan and Kano, while MADE Festival has championed West Midlands’ finest exports including Goldie, Mike Skinner from The Streets, Hannah Wants, Steve Lawler and Lady Leshurr.

Following on from its most successful year, MADE Festival will carry its torch to Perry Park, in a burgeoning region of Birmingham, giving the weekend a new sense of space and freedom. Night time events will also take place across venues in the city centre.

Festival Director, Pete Jordan, commented: “The fifth edition of MADE Festival will build upon the phenomenal success achieved over the past four years and marks an exciting new era for the festival. It’s time to open a new, more colourful chapter in our story and we’re looking forward to making Perry Park our home. We’ll be curating an amazing offering of music, performance arts, graffiti art, street food and celebrating the abundance of creative culture that exists within Birmingham.

We’d like to thank Birmingham City Council and the statutory authorities who have worked hard with us to make this event a reality and help us continue to put the city on the map by showcasing the amazing music events and creative industry that has developed within the city in recent years. We are proud to be spearheading this movement with MADE Festival and appreciate all the support we have received.”

MADE Festival turns 5 with a spectacular line up, an impressive new home, and a diverse celebration of the best of Birmingham’s creative culture. Look out for a further announcement on the MADE night time events soon.