A Campingflight to Lowlands Paradise 2018 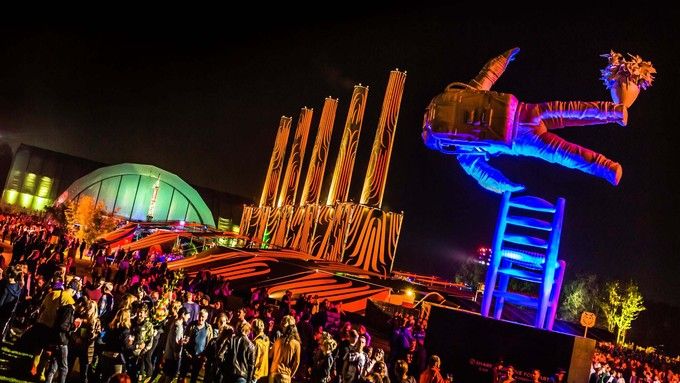 A Campingflight to Lowlands Paradise 2018

Already one of the biggest festivals in Holland, Lowlands has made a name for itself on the international festival circuit and prides itself in supplying top notch facilities for it’s visitors. Rivalling festivals such as Reading & Leeds, TRNSMT and Electric Picnic, Lowlands includes a wellness village with saunas, hot tubs and sports facilities, dozens of restaurants from all corners of the earth, food and drink stalls, a large market with everything from clothes and vinyl stores to a barber’s shop, its own currency, a local radio station, a daily newspaper (Dutch only) and, last but not least: seven luxury campsites with flushable toilets and hot showers. A Campingflight To Lowlands Paradise really is the ultimate summer holiday extravaganza with a line up to match.

The 26th edition of ‘A Campingflight to Lowlands Paradise’ will take place at Walibi Holland in Biddinghuizen from 17 to 19 August. Just over hours drive or train journey from Amsterdam ‘A Campingflight To Lowlands Paradise’ is exactly what it promises to be: a true backpacker’s Garden Of Eden and Holland’s most adventurous cultural outdoor event, with an extensive program with over 250 acts offering only the best in alternative music, film, theatre, comedy, visual arts literature and science.

For three days in August, a township with thousands of inhabitants arises in the middle of the country.
The Lowlands festival features heavyweight headliners, impressive installations including the new armadillo featuring the renowned chimney stacks and no less than twelve stages (among which a cinema and theatre), going by the names of Alpha, Bravo, Heineken, Lima, Juliet, X-Ray, Echo. All stages are covered too, so you can enjoy all the music and entertainment come rain or shine.

Fun facts about Lowlands
• Lowlands has two backstage pet horses who’ve been living there since the first edition of Lowlands in 1993 who love to cuddle with the backstage crew.
• Lowlands has a wellness village with hot tubs and saunas and where you can participate in all day long yoga sessions and get a massage.
• The festival site Lowlands takes place on every year used to be part of the sea, but it has been drained in the fifties to create a brand new province in The Netherlands. It still lays 3 meters below sea level.
• Since the first edition in 1993 there’s always has been an area at Lowlands that’s open 24 hours a day, so the party really never stops.
• Lowlands has it’s own TV station: Lowlands TV (LTV) which broadcasts only original and on site created content all festival long on big screens all over the festival grounds.
• Lowlands also has it’s own daily newspaper with Lowlands news, reviews and previews which is distributed on the camp site every festival morning.
• Lowlands Festivals includes a theatre where you can see dance, comedy and drama plays + has an cinema.
• Lowlands only sells 3 day-tickets and no separate day tickets, which means everybody’s there for the whole weekend.
• At Lowlands 2016 Dutch Olympic gymnast Yuri van Gelder was dismissed from the Olympic Games in Brazil a week before the finals because of consuming alcohol. Lowlands decided to give him a second chance and offered him the opportunity to perform his routine on the rings at the Alpha stage for a huge festival crowd.

Camping and Glamping
Your festival ticket includes camping at the seven luxury campsites with flushable toilets and hot showers. There are also plenty of affordable camping and gllamping options from basic tent packages to teepees, wooden huts or caravans. Perfect if you don’t want to carry all your camping gear with you and for a stress free festival experience Book now here: http://gllamcamp.nl/en