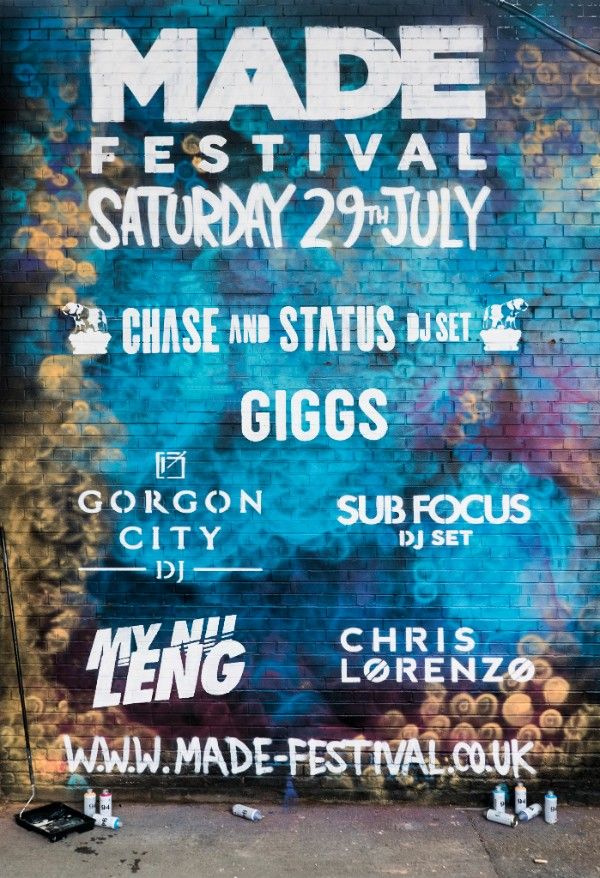 Yesterday evening (Tuesday 24th Jan), MADE Festival announced their first 6 headliners with a live graffiti video on facebook racking up an impressive 12,000 views and revealing Chase & Status, Giggs, Gorgon City, Sub Gocus, My Nu Leng and Chris Lorenzo with the phase 1 artwork sprayed onto a wall at the festival site.

Celebrated as Birmingham’s largest music event, MADE Festival returns to the Digbeth Triangle on Saturday 29th July to showcase a selection of the best in live and electronic talent as well as some of the city’s most exciting and inventive street art, street food and venue spaces. Armed with the most diverse and exciting line-up to date, the UK Festival Award nominated event will return in the fourth year to The Rainbow Venues' collection of industrial spaces within the Digbeth Triangle for a truly memorable weekend.

Capturing its character in a graffiti tagged line-up announcement, MADE Festival’s mission is to continue celebrating Birmingham’s rich music, art and street culture on every map Britain-wide. The phase one headline artists set a high-tempo tone for the festival, featuring the best in grime, drum and bass, house and garage.

Chase & Status bring a discography to their ever-dynamic DJ sets that doubles up as a cast list for the best on the UK beat, flying a flag with every colour from dubstep to grime constituted. Marshalling the scene under MTA Records with a new LP soon to be let loose, the D&B dons will be joined by a DJ set from the renowned Sub Focus and the ‘Landlord’ of Grime since ’07 Giggs, whose widely celebrated album saw him receive critical praise across the board.

Calling on the circuit-breaking Birmingham-boy Chris Lorenzo, MADE Festival will continue to champion the emerging local scene, whilst Bristol sub-heavy selectors My Nu Leng featuring Dread MC. London duo Gorgon City will also be joining the party, with their unique brand of chart-crossover house.

With further programming across the weekend, new artists and production details yet to be announced, it’s gearing up to be the most spectacular MADE Festival to date.

Tickets go on sale on Thursday 2nd February from www.made-festival.co.uk