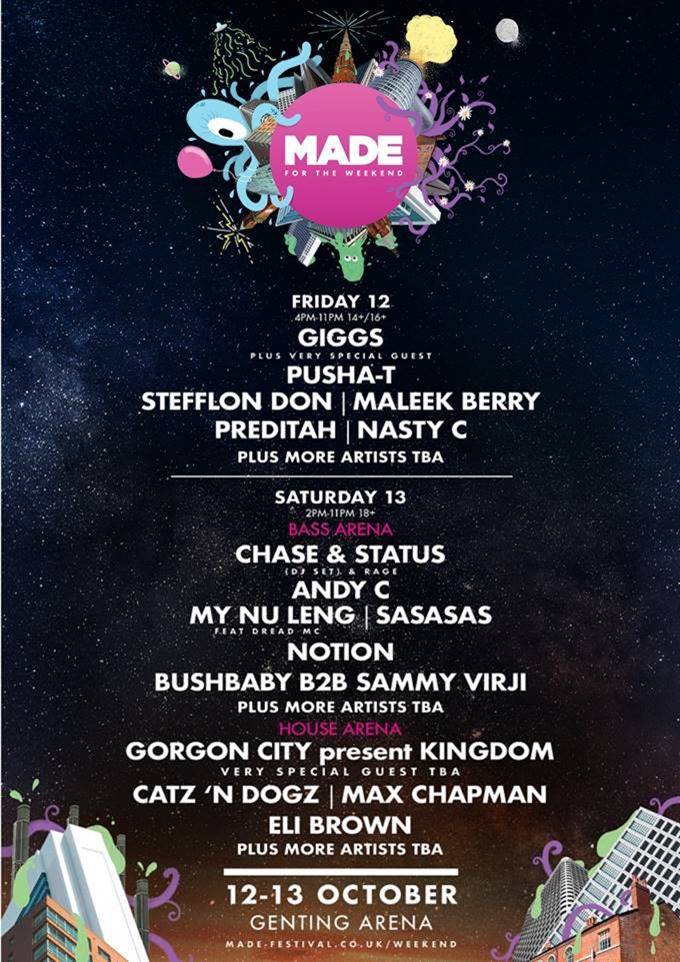 MADE Festival continues the 5 year celebrations presenting a huge line up of talent to Birmingham’s prestigious Genting Arena on Friday 12th and Saturday 13th October. Following a sold out MADE Festival, hosted at Perry Park this summer, MADE have joined forces with AEG, one of the world’s leading live music promoters, to create MADE For The Weekend.

Following the successful move to Perry Park and a sold out MADE Festival, the team turn their attention to the prestigious Genting Arena in Birmingham, joining forces with AEG, one of the world’s leading live music promoters, to deliver ‘MADE For The Weekend’, a two day indoor festival, unlike anything this iconic venue has seen for many years. MADE For The Weekend will take over on Friday 12th October with a massive line up of hip hop, grime and bass with Giggs, Pusha T, Stefflon Don, Maleek Berry, Preditah, Nasty C, then, on Saturday 13th October, get ready for the giants of drum ’n’ bass and house music, including Chase & Status & Rage, Andy C, My Nu Leng feat. Dread MC, SaSaSaS, Gorgon City present Kingdom, Notion, Bushbaby brb Sammy Virji, Catz ‘N Dogz, Max Chapman, Eli Brown and many more yet to be announced. MADE Festival continues to raise the bar bringing this unmissable weekender to Birmingham. Day tickets cost from £32.50 and weekend tickets from £55, both plus booking fee, will be available from www.made-festival.co.uk on Friday 10th August.

As MADE Festival continues to grow, so does the scale of the team's ambitions. In partnering with AEG, MADE Festival steps up another level to bring something new to the Genting Arena; a feast of urban and electronic music guaranteed to make your weekend.

“After the 5th year of the MADE Festival summer edition and a 12,000 sell-out at Perry Park in July, we felt it was time to take the brand to the next level. We wanted to bring the extravaganza of the festival into an indoor setting, and in Autumn when the UK festival season is well and truly over. Choosing the world class Genting Arena at the NEC for our new two-day event felt like an appropriate move and we cannot wait to see the all-star, multi-genre line come to life there.”

“We are really excited to be working with the MADE Festival team. They have built a great event with a strong following and we’re looking forward to seeing how we can build on this together. We are thrilled to be doing MADE For The Weekend in Birmingham. It’s an amazing city that has been such a strong market for touring in recent years, and we hope the local community will be pleased to see this new indoor festival arrive!”

Friday 12th October will see US hip hop royalty land in Birmingham as Pusha T takes to the stage. The rapper, president of Kanye West’s GOOD Music label, has just released his new album, ‘Daytona'. With all tracks produced by Kanye, the critically-acclaimed album debuted at #3 in the Billboard 200and crashed the charts around the world, underlining Pusha T’s status as one of the most influential names in hip hop right now. Pitchfork concluded Daytona to be “Pusha’s best work as a solo artist” – Birmingham crowds at MADE For The Weekend should prepare for an artist at the top of his game.

Representing the best of the UK is Giggs, one of the biggest names in grime. His influence is felt across rap music and he guested on two tracks onDrake’s 'More Life’ album in 2017. He remains as popular as ever with his last mixtape 'Wamp 2 Dem’ hitting #2 in the UK album charts, matching the performance of 2016’s seminal album ‘Landlord’.

The biggest female artist in UK rap, recently signed to Polydor Records, also steps up to the MADE For The Weekend stage. Stefflon Don comes alive in front of the big crowds and is sure to light some fires.

DJ and producer, Preditah, another homegrown Birmingham talent, will take over the turntables to get the Genting Arena jumping, showing why Fabric requested his unique mix of UK house, grime and garage, at the helm of a coveted Fabric Live album release.

Completing the opening bill at MADE For The Weekend is British-Nigerian, Maleek Berry, known for working with the likes of Davido and Wizkid, and his unique and addictive sound which sublimely fuses influences of R&B, afropop, reggae and hip-hop. And the superbly skillful MC, Nasty C, who’s currently riding high on the release of his 'Strings and Bling' sophomore album.

Saturday 13th October is another stellar line up sure to shake the Genting Arena to its foundations. Drum ’n’ Bass superstars Chase & Status will step up for DJ set accompanied by MC Rage. The duo arrived with a bang in 2009, hitting the UK top 10 with ‘End Credits’ featuring Plan B and have maintained their position at the pinnacle of the genre, consistently headlining major festivals around the world.

Andy C is an artist who can confidently share the spotlight with Chase & Status (they even played B2B at Amnesia in Ibiza this summer). After recentlyselling out Wembley Arena in only 3 days and headlining his own Ram Arena at MADE Festival 2018, his popularity just keeps on rising. The Ram Records head honcho is an integral part of drum ’n’ bass culture and his skills as a DJ and producer are second to none.

Saturday’s line up also includes some of the hottest names in house and bass, with Gorgon City bringing their bass-infused Kingdom brand to the Genting Arena in a special extended DJ set. Known for their crossover UK top 10 hits including ‘Ready For Your Love' ft MNEK and ‘Here For You’, as well as a top 10 album ‘Sirens’, Gorgon City are preparing to drop their brand new album ‘Escape’ so expect the hype around this talented duo will be at a peak when they take to the MADE For The Weekend turntables.

Hot off the heels of their stellar performance at MADE Festival 2018, SaSaSaS will appear at MADE For The Weekend. The MC-led D ’n’ B supergroup remain one of the biggest acts to come out of the underground taking their blend of hard hitting, energetic music alongside the very best UK MC culture has to offer to festival and club stages everywhere.

Notion, one of bassline’s most prominent new-generation artists, will also step up at the Genting Arena, showing why he’s been steadily denting the game with weapons on labels likes White Peach, 877, Four40, Crucast, and his 2017-launched own label N Music, that have seen him gain support fromestablished names such as DJ Q, Flava D and Preditah.

Saturday at MADE For The Weekend sees a not-to-be-missed back to back set from Bushbaby and Sammy Virji. The former is a key member of Brighton’s perennially on-point bass collective Southpoint, and the latter, an artist with a distinctive sound regularly supported by TQD, TS7 and many more. Expect monster basslines and broken bumpers from the duo.

The duo talent continues to hit hard when Polish groovemasters, Catz ‘N Dogz, step up to the plate. The Watergate residents will no doubt have bag of weapons ready to unleash from their ever-popular pop ‘Pets’ label.

Resonance Records head honcho Max Chapman will fly the flag for UK talent. Hot from serving up his prestigious Essential Mix on BBC Radio 1 back in April, Max is primed to deliver a set of pumping, rolling house beats to crowds at MADE For The Weekend.

Finally completing the bill for now, is Eli Brown, a house producer popular with Toolroom Records, SubSoul and other leading imprints. With over a decade to his name, expect nothing short of perfection when he steps into the booth for this mammoth weekend of clubbing.

MADE For The Weekend looks certain to live up to its title; a huge two day spectacular dropping some of the hottest established, and up and coming artists into the illustrious Genting Arena for an event big enough to carry on the MADE Festival 5 year celebrations. With AEG also on board, the team at MADE Festival are about to break new ground and deliver a party Birmingham will never forget. Keep on socials for further line up announcements.