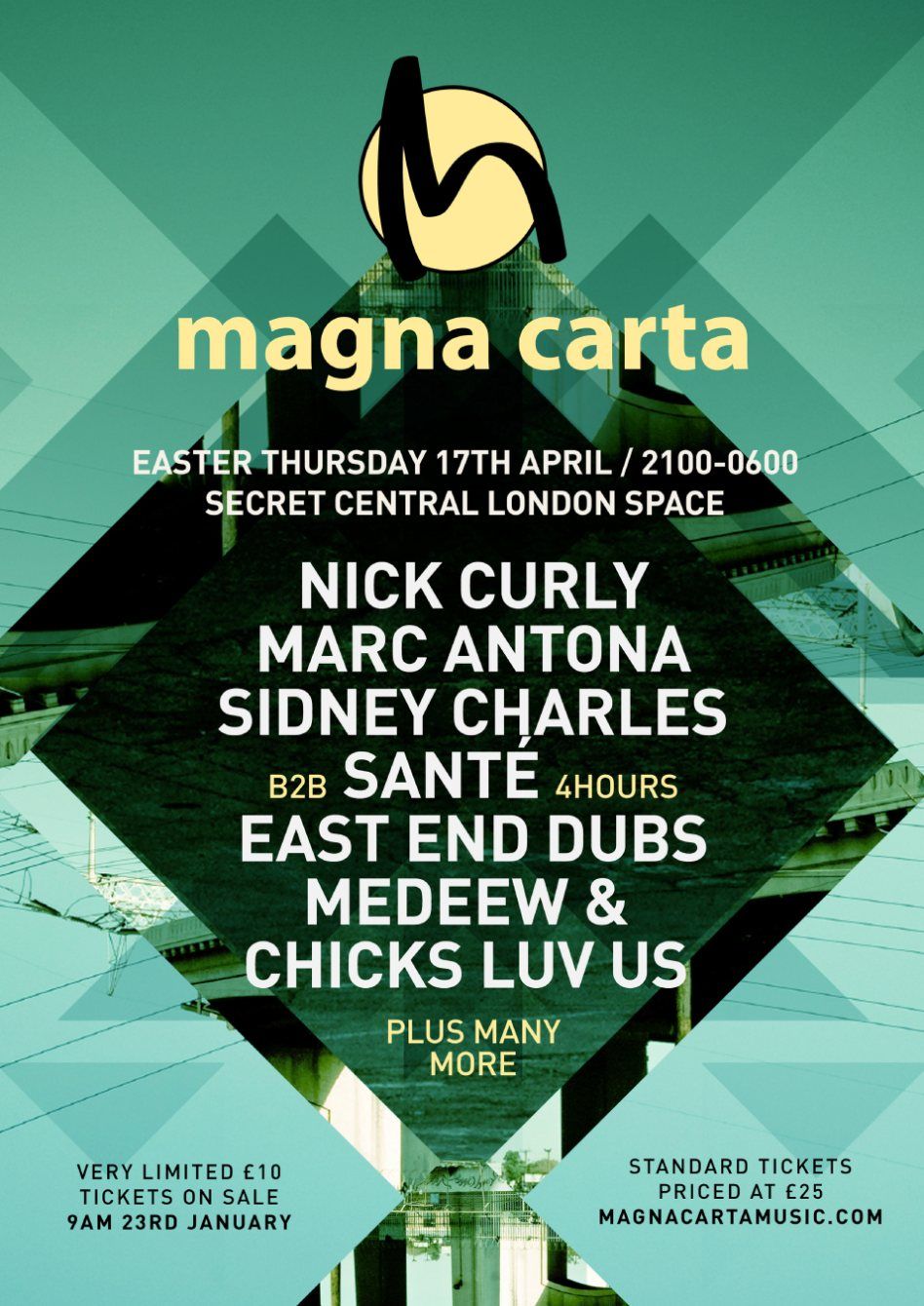 Following the sell-out success of their New Years Eve show at London’s prolific Coronet Theatre, Magna Carta are back and ready to take on 2014 with the first of three colossal London shows this year. Having forged a lauded reputation as tastemakers on London’s club circuit, Magna Carta Easter Thursday features some of the finest sounds in house and techno with sets from Nick Curly, Marc Antona, Santé b2b Sidney Charles, East End Dubs and Chicks Luv Us b2b Medeew, offering a fitting start to the longest weekend of the year.

Continuing to champion the underground sound, Magna Carta bring one of house and techno’s most talented and well respected figures, Nick Curly to headline room one for their Easter party. Head honcho of Cécille and 8Bit Records, he is fiercely revered for helping to define tech house as a genre with his distinctive hypnotic groove. Following on from Nick is Music On resident Marc Antona. Gearing up to spend another season gracing the world famous Amnesia Terrace for Carola’s weekly roadblock, Marc is all set to bring the fire to heat up proceedings in true Eivissa style. Emerging figure on London’s club scene and Magna favourite East End Dubs will add his flavour to proceedings to complete main room line-up.

Room two will be hosted by respected Berlin imprint AVOTRE for their first ever London showcase. Featuring two epic extended back-to-backs sets the first will come from Label boss Santé along with AVOTRE main man Sidney Charles. Philipp Maier aka Santé has spent the past few years painting Berlin red with an eclectic flavour of techno. His world class productions have seen releases on some of underground music’s hottest labels including Defected, Objektivity and of course his own imprint; AVOTRE. With rumours of a debut artist album in the pipeline, those in attendance can expect something very special from Santé. Label mate and long time B2B sparring partner Sidney Charles was the most charted artist on Resident Advisor in 2013. Having laid firm roots in Hip Hop throughout the 90s and Naughties, Sidney brings a sophisticated edge to proceedings, laying down deep melodic beats throughout his mixes. The second four-hour b2b will come from the fresh talents of French production duo Chicks Luv Us and tINI protégé Medeew.

With two rooms showcasing the finest underground sounds Magna Carta Easter Thursday offers and epic start to the longest weekend of the year.