Known for releasing quality club records, ‘Untold Business’ sees Mark Knight go back to his roots, reprising the sounds and records that made him the DJ he is today. Delving through his extensive collection of classic Funk, House, Soul and Disco records from the 1970s and 80s has provided the bedrock for the album which pays homage to the soulful, vocal house music that Mark first fell in love with in the 90s. With stunning results primed to stand the test of time, ‘Untold Business’ boasts some of Mark’s best work to date, testament to his creativity and maturity as an artist, and indeed, why he is still one of the UK’s best loved dance music producers!

‘Untold Business’ will be released on June 25th 2021 on Toolroom Records. 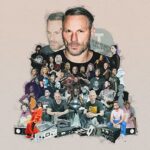