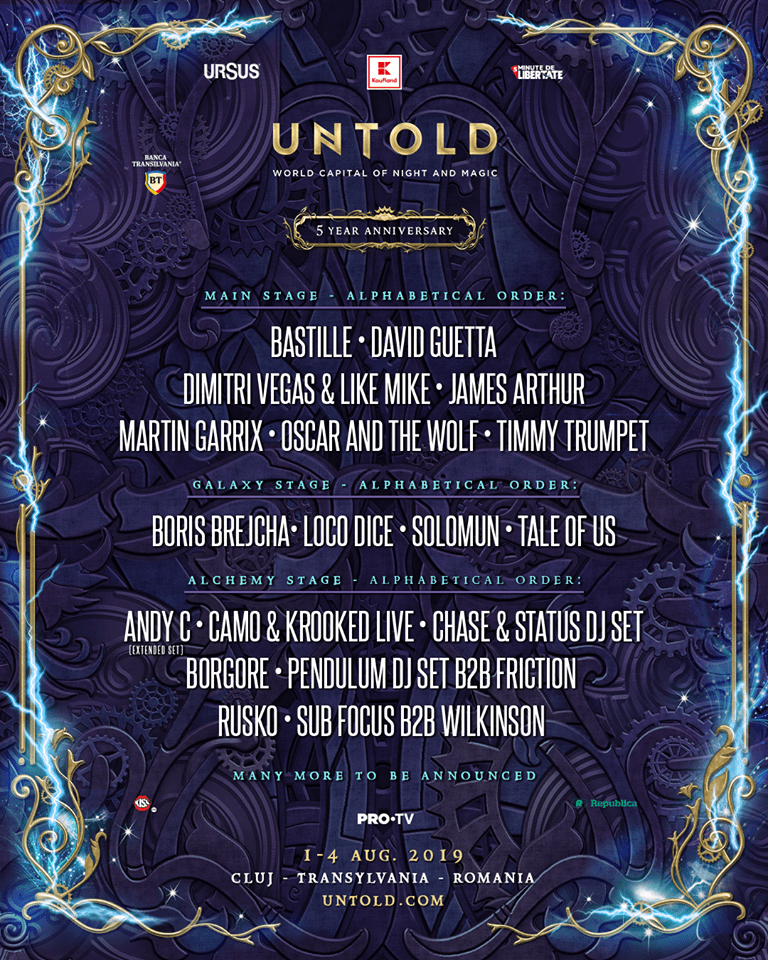 Attracting over 350,000 people across last year’s edition, Romania’s incredibleUNTOLD festival is one of Europe’s most incredible gatherings of electronic music and celebrates its 5th Chapter this summer. Taking place in the Cluj Arena and surrounding Central Park in Cluj-Napoca, this breathtaking 9-stagefestival has announced its first swathe of huge artists for this year’s bill.

The Mainstage will rock to the sounds of three huge artists: David Guetta, Martin Garrix and Dimitri Vegas & Like Mike. Between them, they count billions of plays, views, downloads and dozens of smash hits and multiple DJ Mag Top 100 Poll #1 rankings… When it comes to big stage performances and anthemic arena-filling music, they are unparalleled. Australian star Timmy Trumpet joins with his unique mix of live performance and DJing.

Also, Bastille who has sold over 7.5 million albums and spawned monster hit singles like Pompeii will bring their vibrant pop sound to the Cluj Arena main stage, with fellow British pop sensation and The X Factor winner James Arthurset to deliver his stunning tracks too.

Belgian star Oscar And The Wolf will show why he sold out venues like Amsterdam’s legendary Paradiso in just four minutes and headlined Pukkelpop, while breakout sensation Timmy Trumpet will show why there’s no-one else like him when it comes to combining DJing with live performance.

Across the other stages, you’ll find all manner of big electronic music talent, including Solomun, Tale Of Us, Andy C (extended set), Pendulum b2b Friction, Boris Brejcha, Sub Focus b2b Wilkinson, Borgore, Camo & Krooked LIVE, Chase & Status (DJ set) and Rusko. Every taste is catered for at this massive all-day & night party, with many more artists to be announced in the coming weeks.