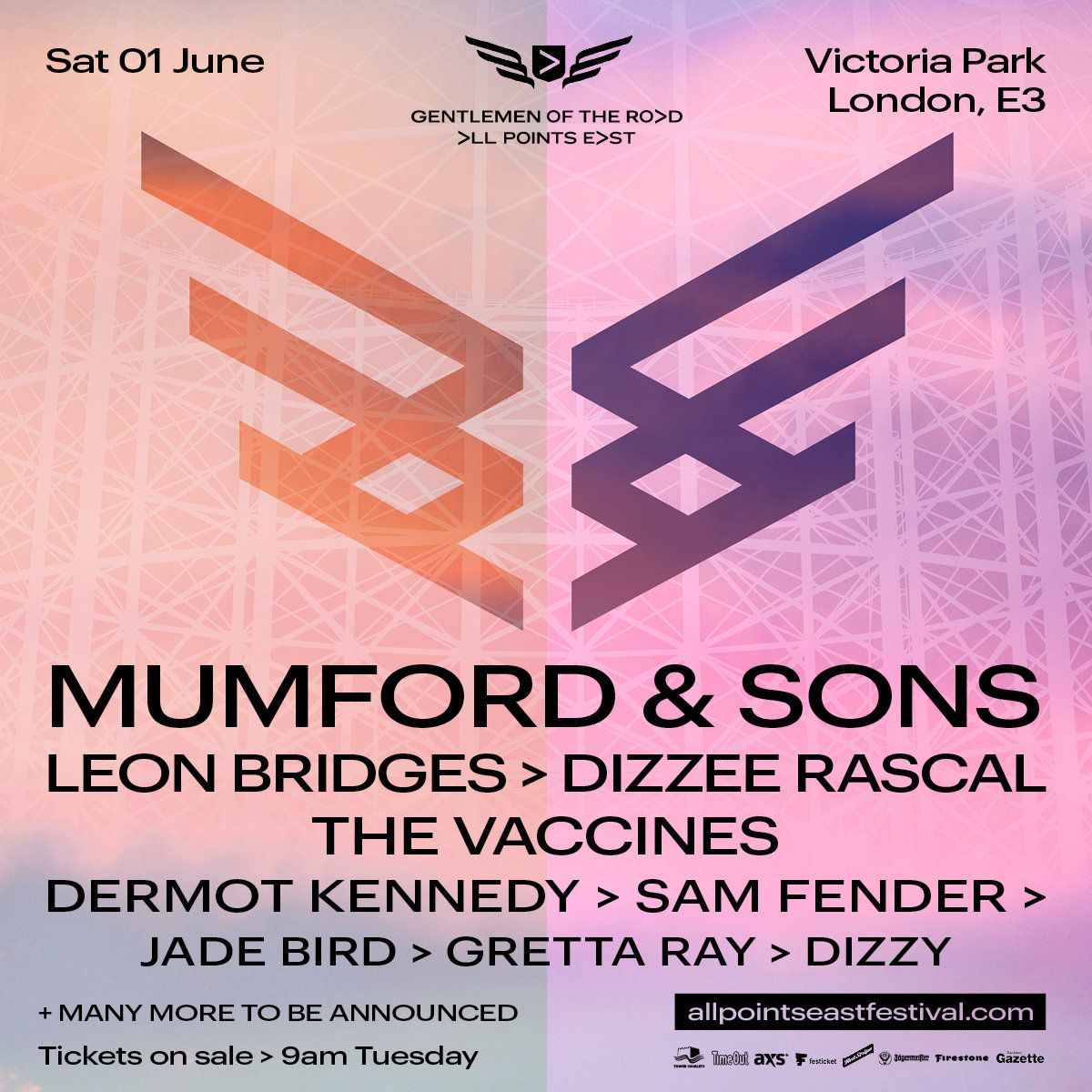 All Points East are excited to reveal a very special collaboration for its final headliner, welcoming Mumford & Sons and their own Gentlemen of the Road event to Victoria Park this summer.

An already phenomenal line-up of blockbuster Summer shows gets even bigger as one of Britain’s biggest and best live bands Mumford & Sons concludes the festival line-up, and bring a host of their friends and favourite live artists to share the party.

All Points East returns for a second year to Tower Hamlets’ Victoria Park, following a sold-out 2018 debut that established a new and essential music event in central London. Gentlemen of the Road is Mumford & Sons’ quickly established community-minded touring festival. Having already taken it around the globe with weekend Stopovers in England, Ireland, the US and Australia, each and every event puts due prominence on the town or city they arrive in, ensuring the local community are as involved with its planning as they want to be, and offering a spotlight on the locale to a huge audience. The band are very excited to join forces with All Points East for one of their biggest shows of the year.

Mumford & Sons are one of the UK’s most successful bands. Since the release of their debut album, the multi-million selling Sigh No More almost a decade ago, the band have since released three more albums which have almost all debuted at the top of both the UK album chart and the US Billboard 200. At the tail end of last year, the band released Delta, their fourth album and most experimental to date, and their most critically acclaimed release to date. Rarely do Mumford & Sons rest on their laurels, and Delta is a record brimming with ideas and melody.

Ultimately though, the four-piece will tell you that those records are an advert for their stadium-ready live shows, and it’s that which All Points East look forward to witnessing in Victoria Park this Summer.

Gracing the All Points East line up for the first time is Grammy Award winning soul artist, Leon Bridges. The American sensation’s first strides as an R&B artist prompted comparisons to legends like Sam Cooke and Otis Redding, but he quickly came into his own as an artist. His first album, Coming Home, debuted at number six on the Billboard 200 and was nominated for two Grammys. Last year, he released his contemporary and stylistically broader second album, Good Thing, which hit the top 2 in the US and won him legions of new fans. Bridges has already enjoyed a frenetic 2019, joining Mumford & Sons in Auckland in February, and picking up his first Grammy Award for Best Traditional R&B Performance for the exquisite ‘Bet Ain’t Worth the Hand’.

Like Mumford & Sons, another British pioneer of music at All Points East is Dizzee Rascal. Known for his distinctive rapping style, Dizzee’s first album Boy in Da Corner won the Mercury Prize in 2003. Then age 19, he was the first rapper, as well as the youngest artist, to do so. His 2009 album Tongue N' Cheek included a string of UK number one singles: ‘Bonkers’, ‘Dance wiv Me,’ ‘Holiday’, and ‘Dirtee Disco.’ RASKIT, Dizzee’s sixth album and first in four years, teams a stellar array of US producers with the sound of one of our finest MCs. A true British legend, and worthy of the title.

The Vaccines are long-standing friends of Mumford & Sons, having performed with them across the world since their inception. The stellar London-based indie rockers formed in 2010 and have had a string of majorly successful hits since, including ‘Post Break Up Sex’ from their debut What Did You Expect From The Vaccines? – the biggest selling debut of that year. Over the past year, the band have been making a comeback with their fourth album, Combat Sports, and a summer chock-a-block full of shows. A truly exciting, hard-hitting live band.

As the winner of this year’s BRITs Critics Choice Award, Sam Fender is the artist on everyone’s lips right now. Having toured the UK and Europe relentlessly, building himself a loyal, passionate army of fans, Sam wraps his pertinent words in rousing, guitar anthems and delivers them directly with a cavernous, powerful vocal. His acclaimed 2018 debut EP Dead Boys was recorded just a stone’s throw from the River Tyne where he was born and bred. The EP furthered Fender’s reputation for music with an eye for social consciousness and political awareness. Having already supported some of the biggest names of recent years, and smartly cultivated hundreds of thousands of listeners globally, Sam Fender seems destined for a huge 2019.

Dermot Kennedy is, like his singing, calmly but assuredly making his way to the top. The Irish singer’s impressive numbers online say it all. Thanks to early appearances on prominent Spotify playlists, Kennedy has already accumulated 50 million streams for his acoustic ballad After Rain and almost 40 million for the similarly intimate A Closeness. His gravelly tones, beautiful acoustic sounds mixed with his hip-hop influences are winning him new fans daily to join the loyal army that are already hanging on his every word and note. A tour in the spring will see him playing London’s Brixton Academy as well as having already sold out four nights at Dublin’s Olympia Theatre – a perfect warm up for the summer festivals.

Jade Bird is another rising British star whose music has already brought her much attention on both sides of the Atlantic. Her 2017 debut EP, Something American, got heads turning with the twinkling title track and ‘What Am I Here For’ teasing a potentially important new British voice. Jade kicked off last year in the NME 100 and with a BBC Sound Of nomination and has been winning over everyone who has seen and heard her since. A self-titled debut album is landing this April, just in time for her exciting return to All Points East.

Gretta Ray made an impressive entrance into the Australian music scene with the release of her debut EP Elsewhere in 2016. This EP was written at the age of 15 and showcased Gretta’s admirable command of language and impressive vocal ability, now she’s bringing her talents to the UK.

East London’s beautiful Victoria Park in Tower Hamlets also hosted a hugely popular 4-day community focused midweek event last year. Kicking off on the second Bank Holiday Monday, In The Neighbourhood is set to return across the half term week for 2019. Featuringfreeaccess to the All Points East site, In The Neighbourhood will host a vibrant programme of activities and entertainment, in collaboration with the local community, businesses, organisations and suppliers. From free Outdoor Cinema, Live Music and Entertainment, Street Food to Pop Up Bars, Theatre, Arts, Sports & Wellbeing, Children's Activities and much more.