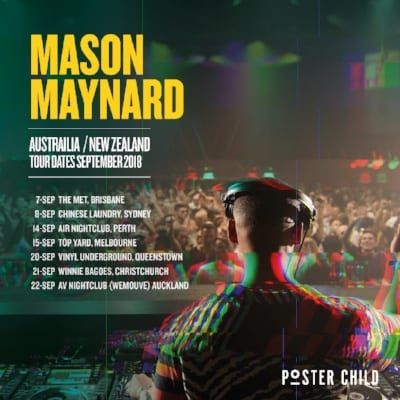 Fresh from the recent release of his latest EP on ​Solardo​’s ​‘Sola’ i​ mprint, Mancunian producerMason Maynard ​has announced his upcoming tour of ​Australia and ​New Zealand​, playing 7 dates downunder this Autumn.

Kicking things off in ​Brisbane on 7th September, Mason ​- who performed to an enthusiastic crowd of 15,000 at ​Parklife this year – will also play dates across ​Sydney, Perth andMelbourne, before heading East to round the tour off in New Zealand. Bringing his beats toVinyl Underground in Queenstown ​and Christchurch ​venue Wiggie Bagoes, Mason ​will end the tour at ​Auckland’s Av Nightclub on 22nd September.

Still only 22 years of age, ​Mason has built up a growing army of support since being named as the ​"One to Watch" by ​BBC Radio 1'​​s ​Monki​, ​with ​Danny Howard ​regularly spinning ​Mason​​’s tracks on his Friday night show. The move led to Danny ​snapping up ​Mason​​’s huge track‘Puffy’ to his ​‘Nothing Else Matters’ label, with the track amassing over ​2 million streams ​so far.

Playing up and down the country as the resident for the recent ​‘Solardo Sessions’ ​tour, ​Masongathered new fans from events at ​The Warehouse Project, ​Hideout and ​Reading & Leeds Festival​ with his eclectic track selections outside of the Beatport Top 100.

The announcement of the Australia ​and ​New Zealand tour follows another busy summer forMason​, who performed several dates at ​Eric Prydz​’​s residency at ​Hi Ibiza​, ​as well as a performance at ​ABODE​​ at Balearic super-club, ​Amnesia.