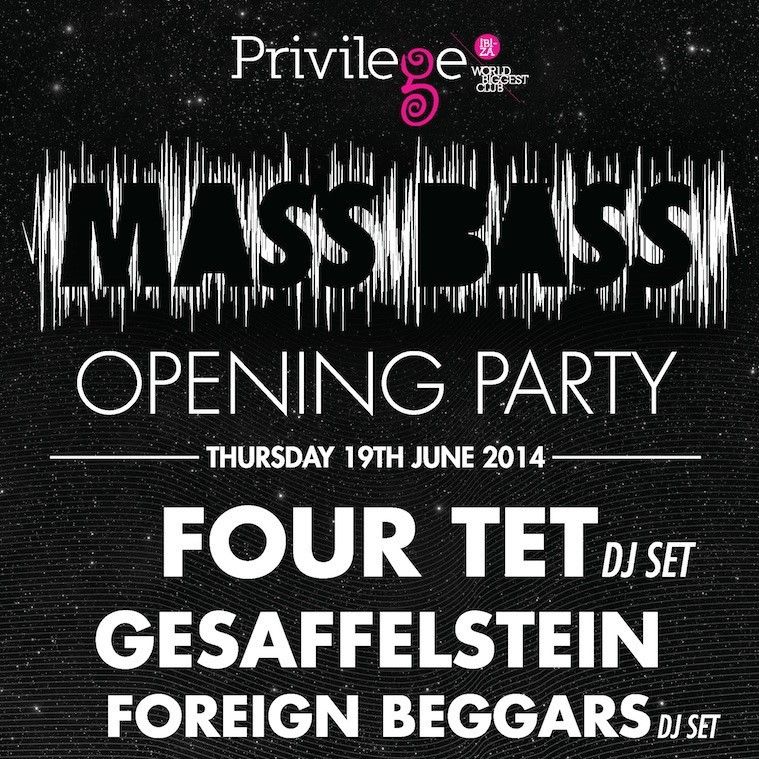 Privilege Ibiza are to welcome a bold new club concept to their doors every Thursday night, with MASS BASS set to showcase some of the most exciting, bass-heavy sounds from across the electronic music landscape. With a firmly focused ethos, specially curated line-ups and a host of special guests lined up throughout the season, MASS BASS is sure to bring an unforgettable clubbing experience to one of Ibiza’s most iconic clubbing spaces.

To launch their residency on June 19th, both MASS BASS and Privilege are proud to welcome one of electronic music’s true innovators in Four Tet, to head up a stellar line-up of bass-centric talent. Renowned for his eclectic, genre-blurring sets, presiding over his ever on-point Text Records imprint and for playing a key role in the development of underground dance music culture, Four Tet is a natural choice to christen the inaugural MASS BASS event.

Alongside Four Tet, seminal UK dance figures Foreign Beggars are also set to take to the decks on the opening night, promising an eclectic, high-energy set comprised of the rich & varied sounds that have defined their journey from Hip-Hop upstarts to one of the UK’s leading crossover electronic music acts. With four full-length studio albums to their name, as well as collaborations with the likes of Von D, Flux Pavillion, Skinnyman, Noisia, Alix Perez and even Skrillex under their belts, Foreign Beggars are sure to bring make an explosive impression at MASS BASS.

Appearances from Brodinski’s sparring partner Gesaffelstein, famed for his tech-edged edits of everyone from Lana Del Ray to Tiga, and Ed Banger Records head Busy P complete an opening line-up that is as strong and exciting as it is diverse and expansive. Support on the night will come from hotly-tipped Spanish drum & bass duo Dub Elements.

Looking ahead to the rest of the season, MASS BASS will be continuing to present a whole host of stellar names from the world of bass music each and every Thursday night. From the deepest, darkest sounds of dubstep originator and Dub Police label head Caspa to the euphoric party jams of famed electro house duo Dada Life, MASS BASS has every conceivable bass sub-genre covered.

With such an exciting and immersive new concept all set to re-define Thursday nights at Privilege throughout the summer of 2014, expect MASS BASS to solidify itself as the destination for those looking for an entirely unique, bass-flavoured clubbing experience.