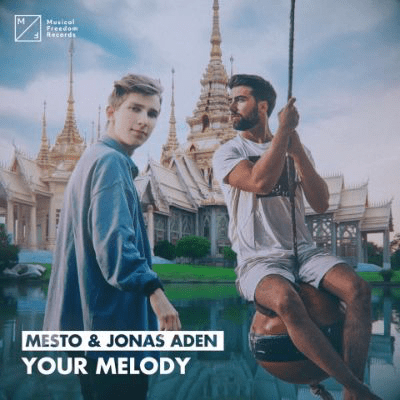 Mesto & Jonas Aden join forces on the instantly memorable ‘Your Melody’, as both artists connect and look to capitalise on both of their fine run of releases recently. Mestohas hit peak form in 2019, following up his critically acclaimed Tiësto collaboration in 2018, ‘Coming Home’, with another release alongside the label boss with ‘Can’t Get Enough’, while his most recent offering came in the form of ‘Back & Forth’ on Spinnin’, a track which was picked up globally by the likes of R3HAB, Bassjackers and Wolfpackafter being premiered by Hardwell. Jonas Aden has also been hitting all the right notes since returning from his production exodus at the end of last year, releasing ‘I Dip U Dip’ on Don Diablo’s Hexagon label after the artist heard it in Brooks’ set at Tomorrowland 2018, a track which has subsequently amassed nearly 10 million streams on Spotify, and was more recently drafted in for a high profile remix of Zedd & Katy Perry’s single ‘365’. Jonas’ most recent track ‘I Don’t Speak French (Adieu)’, also released on Musical Freedom, also garnered impressive attention from artists such as Zedd, Martin Garrixand David Guetta, and was supported by Mistajam on his infamous BBC Radio 1 Dance Anthems show.

With atmospheric rounded bass opening up the track, a nursery rhyme-style melodymakes up the lyrics that dance over the top, whilst a bright synth pushes through occasionally, heightening the anticipation for the initial drop. Vocals become warped and stilted just before the track plunges into a thumping groove, characteristic of Aden’s signature sound.  Once again, hopping between genres and proving his versatility as a producer, the track is current and sophisticated, as Mesto and Jonas Aden glide smoothly through the track’s varying transitions, loading it with dazzling synths, well-crafted glitches and infectious melodies.
With an impressive musical pedigree, both have now proved that they’re far from one-hit-wonders, building their names with consistently high-quality releases that are sure to pique the attention of dance music fans worldwide, and Musical Freedom look set to beon to a winner by recruiting two electrifying breakthrough producer’s at the forefront of the scene, as both artists look to cement their names as some of the most in-demand producers in dance music today.

Grab your copy of ‘Your Melody’, out now via Musical Freedom.