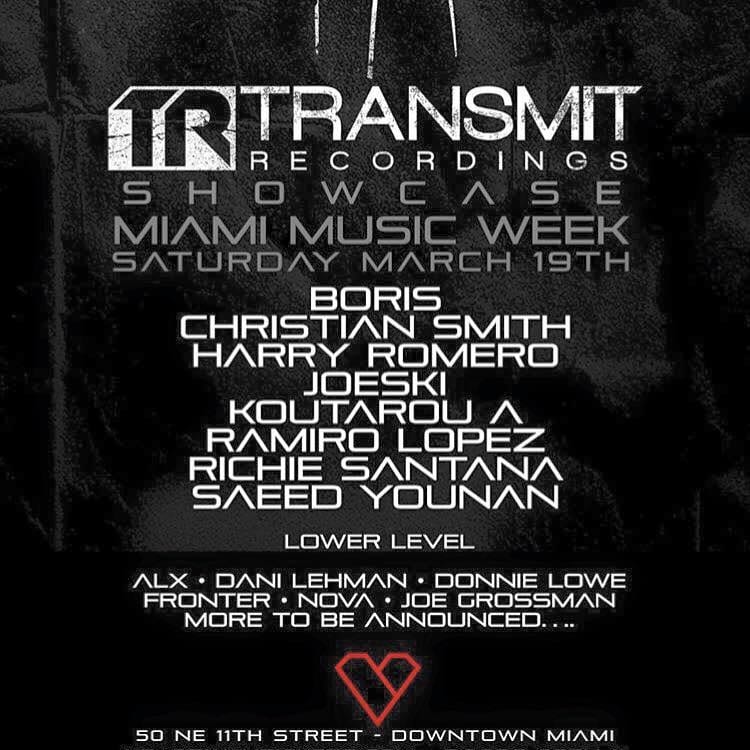 Boris brings an elite line-up of artists to Miami Music Week [MMW] this year at his annual Transmit Recordings Showcase on Saturday, March 19th, 2016.  This year, the event takes place at a new and highly anticipated venue during MMW. Heart Nightclub is Miami's newest hot spot for proper underground house and techno. The three story, 20,000 SF venue is equipped with a state of the art Dynacord Alpha concept system, ready to feed your ears with techno! Boris is also up for a nomination for the International Dance Music Awards for Best Tech House/Techno Track – for his "Can You Hear Me" release (Enrico Sangiuliano Remix). You can vote here.

Representing the Transmit brand in Miami, is a monster line-up of techno's finest. Tronic label boss Christian Smith brings his funky, soulful techno to the decks. Harry Romero, from Transmit's home base of New York City, is a very diverse and ever-evolving producer. Releasing on labels such as Suara, Transmit, Defected, Toolroom and OVUM, it's his energetic productions and adventurous track selections that keep him on top. Joeski, a New York house veteran, has been moving dance floors since the early 90s. A profile that is constantly rising to the top, Joeski's music fills the room with life and colour. Japanese producer, and Oto Music label boss Koutarou A, graces the decks with dark and sexy tribal house grooves he's widely recognized for. Spanish house and techno innovator Ramiro Lopez will take the crowd on a journey as he infuses his sound with all types of music such as jazz, r&b, funk and disco. DC house and techno purveyor Saeed Younan will get the percussive grooves in tune, while Richie Santana delivers destructive energy. Last, but not least, Transmits Recordings label boss Boris brings the showcase home with a very special set to represent his hard work and efforts to bring Transmit Recordings to life.