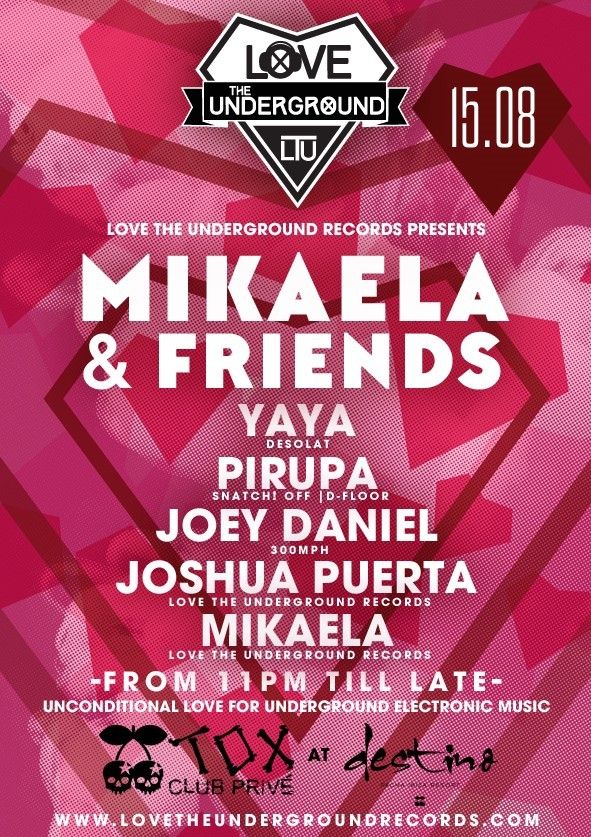 Love The Underground Records presents Mikaela and Friends at Tox Destino, has been the definitive success story of new club brands launching in Ibiza this season. Having kicked off the season slowly, now reaching the half way mark, Mikaela & Friends have gone a long way in securing the acclaim as the islands best new night and has been a road block through out July, something which looks set to continue into August and beyond….

With an un-restrained commitment to a pure musical ethos the brand fronted by Label boss Mikaela has gone on to dominate Saturday nights. Each week sees Mikaela joined by a selection of specially chosen guests, each who fit with the Love The Underground Records selective ethos, but also bring their own unique take on electronic music to the party, that’s reputation and popularity grows week on week.

The opening party with Shlomi Aber set the tone for what was to come over the coming weeks, the talented techno stalwart raising the temperature inside Ibiza’s best, intermit, club to the highest levels.  Joined by rising star Shaded, the blueprint for Mikaela’s night was clear, an unadulterated club night, built on the purest of musical ethos. The following weeks saw Mikaela invite acts such as Popof, Paranoid London, Ramon Tapia, Marco Bailey, Sasha Carassi, Wade and Jon Rundell join her on the line up and keep the consistent anticipation and excitement surrounding Love The Underground Records is at an all time high. Not restricted to just showcasing the big names Mikaela has given a platform to many up and coming artists so far this season, relatively new faces such as BEC, Lilith,  Ellie Petterson and Reelow have all grasped the opportunity and staked a claim to becoming long standing members of the Ibiza DJ Community.