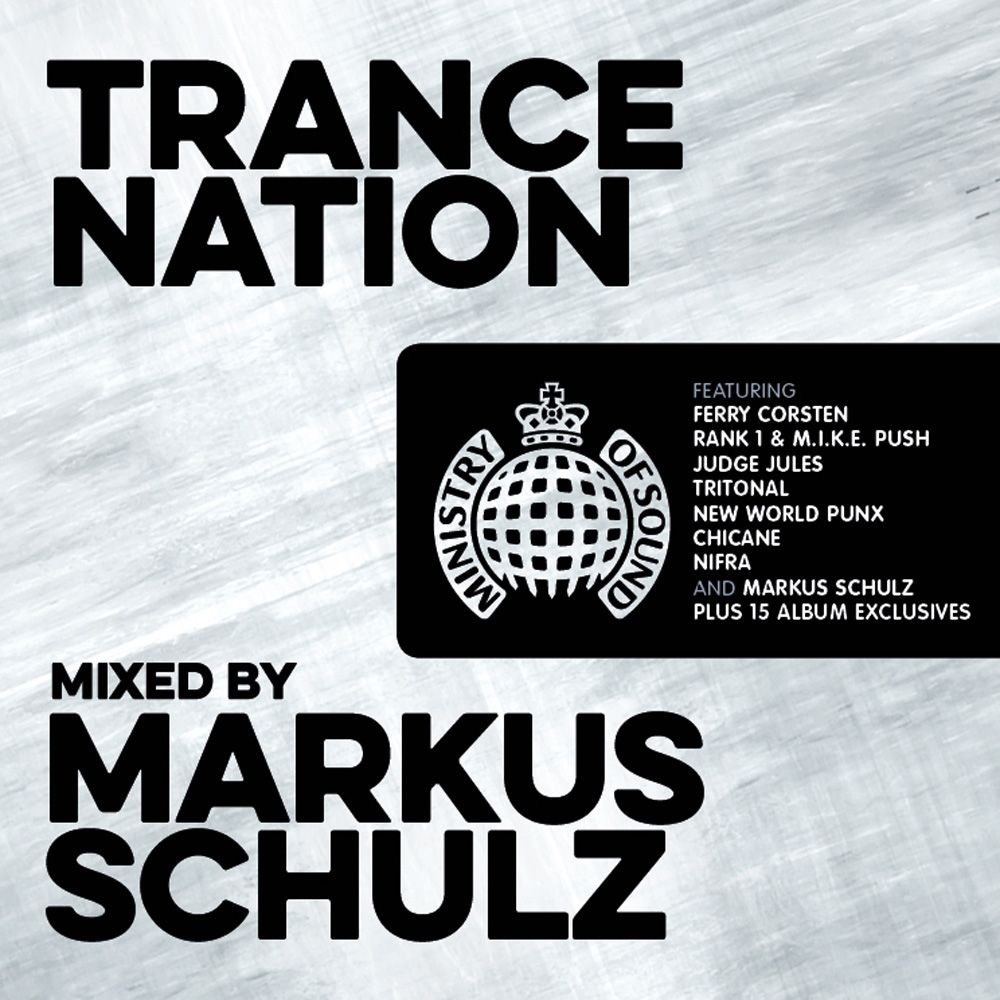 In a break with their established annual-release tradition, October 2015 see Ministry of Sound heed the call of the scene with – for the first time in a decade – a second Trance Nation outing for the year. A testament certainly to its position as the most clamoured-for trance series of all time, this release is every bit as much about the man now stood at its wheelhouse. Secured at long last, to skipper a ‘Trance Nation’ is the Coldharbour master himself, Markus Schulz.

A Gallery resident of long and every bit as illustrious standing, his MoS mix journeys have taken clubbers down trance paths as range-wide as they are long and thrill-packed. Almost as quickly associated with the Ministry’s The Gallery night as the word ‘trance’ itself, he enjoys a reverence reserved for the very few.

Now, at long, long last the stars have aligned, the right cards have fallen and Markus – perhaps the most requested prospective Trance Nation mixer of recent times – steps up to the plate.

To meet those great expectations, Markus has kicked out all the stops. All but awash with exclusives, he brings with him an exceptional number of never-heard-before, up-&-coming tracks to his mixes. Across its 36 featured cuts (15 of which are album-exclusives) highlights ready to meet the ears are abundant…

Amongst their number you’ll find Markus’ dazzling remix of ‘Déjà Vu’ from Giorgio Moroder & Sia, ‘Twilight of the Night’ – a heralding return for his Dakota alias and an all-new version of pre-summer touchdown ‘Tomorrow Never Dies’. That’s really just for starters though… Through tracks & remixes, there’s also a straight flush of productions from trance music’s luminaries… Recent floor-wowers from Ferry Corsten, Chicane, Rank 1 & M.I.K.E. Push, Solarstone, Tritonal, and Judge Jules are all mixed into the discs. To further whet your appetite, here’s also a full spread of productions from Markus’ Coldharbour kings, with music from Mr. Pit vs. Fisherman & Hawkins, Nifra, Rex Mundi, Klauss Goulart and others.

Pick up your copy early through iTunes and take advantage of the pre-order discount price and 3 instant-grat exclusive tracks in the run up to release, Oct 2nd.

On mixing his Trance Nation, Markus said: “From resident on Coldharbour Lane to international resident at Ministry of Sound, the club and the city of London have played a pivotal role in my career development. I am privileged to be able to connect with so many amazing people globally through our love of melodies and trance, and having the opportunity to join the cast list of names associated with a heralded series such as Trance Nation is a huge honour. The compilation is a snapshot of the residency nights, with some of the most important compositions from past, present and future; and hopefully will encourage more of you to travel and contribute towards creating new memories together in the coming years”.

Charging its opening moments with the new Coldharbour Intro Mix of his & Vassy’s ‘Tomorrow Never Dies’ (Bombay), right off Mix 2’s bat, Markus is swinging for the fence. Other ‘destinations’ from Schulz’s 2015 City Series quickly arrive, with a midpoint stop-off in London for the Ministry-dedicated ‘Lost In The Box’ and the ‘Trance Nation’ exclusive outro version of ‘Avalon (LA)’. Running between them is a mass effect of other exclusives. Purple Stories fresh take on neo-classic ‘City of Angels’ from Elevation vs. Grube & Hovsepian; the riff stridence of Danilo Ercole’s ‘Format’ abounds and ‘Knightfall’ & ‘Worlds Apart’ from, Arkham Knights & Artisan rock blocks respectively. Bringing Disc 2 to its towering, uplifting conclusion are Gouryella’s comeback release ‘Anahera’ and Ferry & Markus together on New World Punx’s Coachella-destroying ‘Memories’.

So Trance Family, those calls were heard, those calls have now been answered! You wanted Schulz. South London’s finest are giving you Schulz… 36 different ways! Trance Nation Mixed By Markus Schulz’ is out on October 2nd.