For those who cannot decide if they prefer Tech-House or EDM, Kramder has the fitting solution, going with the title ‘Technotronic’. Remaining true to his own style, Kramder mixed funky Tech-House beats with some harder EDM elements to give the track more body, resulting in a festival-ready tune which will definitely get those hands up in the air!

Known for blending Tech-House with Disco sounds in his productions, this 20 years old from France has already received great support from industry heavyweights like Tommie Sunshine, DJ Snake, Oliver Heldens, Tchami, Mercer & Malaa. ‘Technotronic’ only being Kramder’s first Mixmash release, we are already looking forward to what the future holds… But for now, it’s time to add ‘Technotronic’ to your party playlist, turn up the volume and get into the weekend mood! 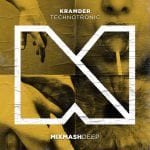