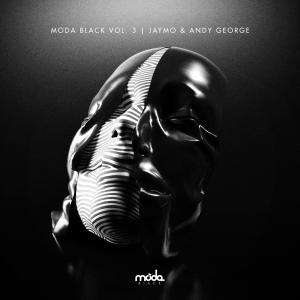 Moda Black has established itself as a hotbed of new talent, awarded iTunes album of the year and selling over 20,000 units for the inaugural edition in 2011. Comprising entirely of exclusive and unreleased new music, and mixed by label owners Jaymo & Andy George, Vol III shines a spotlight on the label’s artists and extended family and gives a clear indication of future stars in the making.

Jaymo & Andy George came up through the ranks after being championed by Pete Tong, soon landing a peak time slot on BBC Radio 1. Since then their role as tastemakers and producers has been proven through steady releases on their own family of imprints and delivering remixes for others such as OFF Recordings and Pets.

Moda Black Vol III takes in new and unheard material from old heavyweights such as Groove Armada alongside solid underground talent and fresh faces such as Ejeca, M A N I K, Darius Syrossian, Alexis Raphael and Nathan Barato. As always the composite elements of the mix have been laboured over, from the sun soaked opening scene to the cinematic end credits; the result is a dynamic journey through all things Moda Black.

o Previous Moda Black compendiums have featured the likes of Eats Everything, Disclosure, Ben Pearce, Hot Since 82 and Maxxi Soundsystem, giving a clear indication of the duo’s skills as tastemakers for future electronic music stars.

o+o Jaymo & Andy George have gained a global following including holding past Moda residencies at We Love.. Space Ibiza and fabric London. They have just showcased Moda at Snowbombing and are set to play at Exit and Sonar later this summer as well as hosting boat parties in Croatia for Hideout and in Istanbul. To coincide with this release they head off on a tour of the UK bringing guests such as Seth Troxler, Maribou State and TEED.