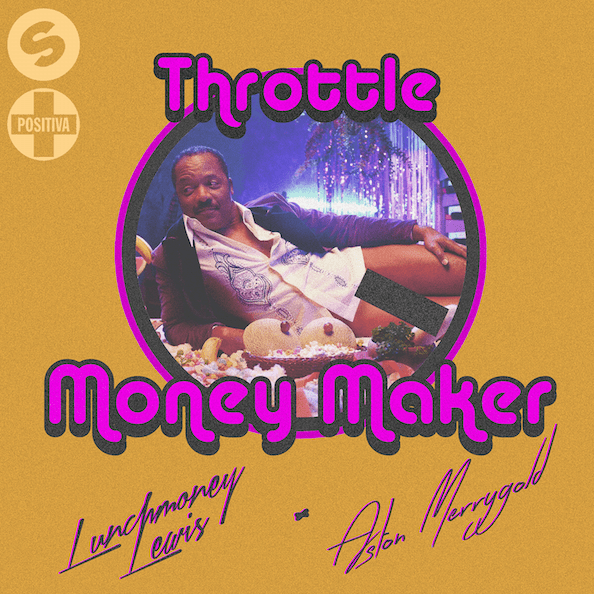 19-year-old, Australian prodigy Throttle is about to make his mark with his funk-infused forthcoming single, ‘Money Maker’ featuring ‘Bills’ hit maker LunchMoney Lewis and former JLS star Aston Merrygold, due out on 9th September via Spinnin’/Positiva.

The club mix was an infectious slice of Throttle's famous 'dirty disco' that combined a classic James Brown vocal sample with lashings of grooving house. Bold string arrangements, funky guitars and feel-good pianos all do battle with an energetic bassline, while breakbeat sections switch things up from the 4/4 beats. It was hard to see how this young producer could have made the track catchier still, but with the help of JLS singer Aston Merrygold and ‘Bills’ hit maker LunchMoney Lewis, he’s somehow done just that.

The soulful, powerful vocals of this dynamite duo elevate the track to an infectious state, a rejigged intro section helps build the energy, and along with its hilariously saucy new video it makes for a seriously potent package. The track was premiered by BBC Radio 1's Clara Amfo today (9th September) and the club mix has already received support from BBC Radio 1's Danny Howard. 'Money Maker' looks set to be one of the big tracks of late summer.

'Money Maker' is the follow-up to Throttle’s Beatport #1 track Waiting: his recent collaboration with like-minded soul Oliver Heldens on his Heldeep label. This year saw the duo collaborate further, with Throttle playing alongside Heldens on a US-wide tour plus at a handful of European festival dates including Tomorrowland. Throttle has also reworked tracks for the likes of Sam Smith, Avicii and AlunaGeorge – the latter being included in the Victoria’s Secret Fashion show this year. With another Beatport #1 already under his belt in the form of his Earth, Wind & Fire 'September' rework, the only occasion the band’s allowed the use of their original music, he is leading the exciting new generation of house music talent that looks set to dominate over the next few years.

Throttle is being pegged as Spinnin’ Records’ next prodigy, following in the footsteps of Afrojack, Martin Garrix and Oliver Heldens. The young Australian is rising to the top armed with advanced studio finesse, his beloved guitar and a clear idea of where dance music needs to go.