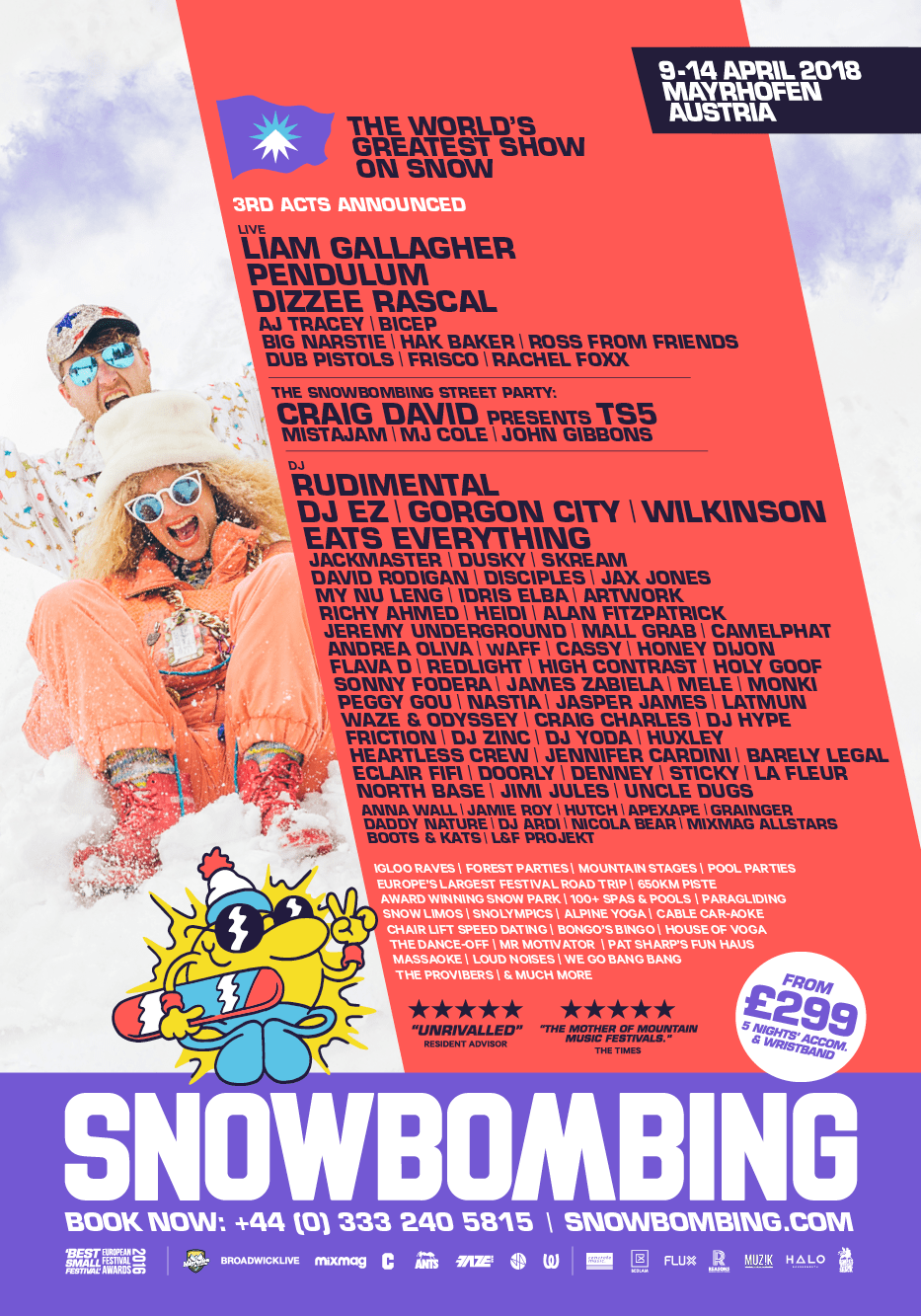 As the winter months draw in and the snow blankets the Mayrhofen mountains, Snowbombing 2018 prepares to burst into frame with one of the year’s biggest lineups and an unrivalled party-atmosphere as The World’s Greatest Show On Snow opens its doors once again – with the final surprises and treats announced for the bill today.

Anthem-splicing mixer and Snowbombing stalwart DJ Yoda has carved a career out of bringing unique genres and sounds together, with his set atSnowbombing sure to be a full-throttle highlight of the entire festival – bringing heritage hip-hop and an atmosphere unlike anything else taking over the slopes. Another unmissable party moment, Craig Charles will be bringing the funk, the soul and the moves to Mayrhofen in 2018 – promising a fizzing set of glorious highlights at every turn for his debut appearance at Snowbombing.

DJ Yoda said:
“Snowbombing is legendary! There's nothing quite like it, for people, music, scenery or slopes!”

Joining a stunning bill of heavyweight names across rock, indie, hip-hop, grime, dance and electronica is even more names primed to soundtrack late-night parties for 2018’s defining festival week. In High Contrast, Snowbombing is set to host one of the defining figures in modern drum and bass – constantly morphing and experimenting with some of the most infectious beats around. After soundtracking the Olympics, and the release of his genre-bending new album ‘Night Gallery’ last year – expect the unexpected when he takes to the decks in Mayrhofen. Another pivotal figure, and one of the most exciting figures in modern dance – Honey Dijon is set to head to Mayrhofen next year with an unmissable set that’s bound to have thousands moving to a heavyweight tour-de-force of electronic royalty. Renowned for taking the idea of genre and throwing it well and truly out of the window, Honey Dijon’s influence on club culture is huge, taking in decades of innovation and packaging it into the next evolution of dance music. A worldwide phenomenon – Snowbombing is next on the list for Honey Dijon, with the results primed to be unlike anything else you’ll see in Mayrhofen. Also announced today, forward-thinking Ukranian starNastia will head to Snowbombing 2018, showcasing her blending of genres in an emphatic style that will make sure her set is the talk of the slopes. Over the past few years, she’s become one of the most in-demand names in electronic music, with nights around the globe and a fevered reaction to a true master of DJing at work. For the first time, Nastia comes to Snowbombing – and the results will be something we’ll all be talking about for years to come.

Renowned ANTS titan Andrea Olivia will also be flying into Snowbombing for a packed set of immediate favourites, stemming from huge support from the likes of Pete Tong and fellow electronic luminaries. Destined to be a crowd-pleasing highlight of the festival, he’ll be taking pride of place as a part of the ANTS Stage takeover at the Racket Club – also featuring the likes of the previously announced Gorgon City, Camelphat and Richy Ahmed.

Cassy has built a towering reputation where no two shows feel the same. Pulling together influences across the techno sphere, her set of favourite cuts will see the Snowbombing masses flood to the front for a techno masterclass. Equally thrilling is the explosive rising moves of Holy Goof whose shows have become a hard-hitting must for all bass fans. Playing acclaimed sets at the likes of Printworks and a packed-out UK tour over the past year – it’s only a matter of time before he becomes a true sensation, with Snowbombing marking a perfect moment to see why.

Holy Goof said:
"This is a festival i’ve always wanted to go to, so super hyped to be playing at it. Just got to try and come back in one piece."

Snowbombing regulars Dub Pistols know how to throw a good party, with a set that pulls across ska and reggae amplified by big bass drop and unstoppable energy, they never fail to disappoint! Heading to Mayrhofen once again in 2018, expect their set to be rammed with party-goers fully embracing the opening of the Forest Party as Dub Pistols roll into town.

Aussie house king Sonny Fodera knows all about show-stealing festival moments – and his return to Snowbombing is bound to be yet another memory to add to the collection, with an unmissable spectacle of bass-weaving magic.Eclair Fifi joins the Snowbombing bill as one of the most in-demand DJs of recent times, taking music, fashion and culture into a melting pot of essential modern dance, whilst Born Electric head honcho James Zabiela will bring his rich history of forward-thinking sounds to the streets of Mayrhofen once again for a set that’ll have thousands in the palm of his hand from the very first beat.

Across the board, the variety is staggering – whether that’s BBK favourite Frisco, ‘Pushing On’ chart cruncher Jimi Jules, Manchester’s jungle/dub collective North Base, the infectious heights of Jennifer Cardini the fast-rising R&B charm of Rachel Foxx, Sweden’s own Power Plan Records boss La Fleur, the brass tones and party spirit of Loud Noises, the live singalong clubbing sensation that is Massaoke, or the experience of fabulous fitness meeting 80s vogue fashion with House Of Voga – it’s a true platter delivering a celebratory week like no other that proves why Snowbombing is quite simply The Greatest Show On Snow.

North Base said
"We are so delighted to be returning to Snow bombing in 2018! The festival is one we always look forward to as we get to see so many of our friends in the industry, the vibes are serious and the parties are wicked, it’s just the place to be. However our main shout out has to go to the legend that is  'Hans the butcher'!"

Rachel Foxx said:
"I'm so excited to play at Snowbombing! Its my first time in Austria and all the acts on the line-up look proper sick…. can’t wait"

These names join a staggering bill of heavy hitting favourites and of course the iconic voice of Liam Gallagher for his Snowbombing debut. Reformed drum and bass legends Pendulum return with a dive through their incredible and visceral live show, whilst grime originator Dizzee Rascal gears up for a ‘Bonkers’ journey as the ultimate party-starter for a ‘Holiday’ under Austrian skies. Along with The Snowbombing Street Party (headlined by Craig David’s TS5) Snowbombing will also see further sets from the likes of Bicep live, Rudimental (DJ), DJ EZ, Jackmaster, AJ Tracey, Wilkinson, Idris Elba, Skream, Dusky, Big Narstie, David Rodigan, Jax Jones, Artwork, Heidi, Disciples, Mall Grab, Flava D, Alan Fitzpatrick, Redlight, Monki and many more – there’s an avalanche of moments you won’t want to miss at Snowbombing 2018!

Snowbombing provides the chance to party in the most unique locations, from incredible headline performances in a magical alpine forest clearing, an underground tennis club turned super club, igloo raves at 6000ft and more, not to mention the Spas & Saunas, Paragliding, Chairlift Speed-Dating, Cable Car-aoke, Alpine Yoga, Cable Car Raves, Ride & Seek, an award-winning Snow Park, Bongo’s Bingo and The Snolympics. Visitors can eat authentic Austrian cuisine in the well-known, delicious restaurants, ride in style in Snow Limos or see the incredible sights of Mayrhofen from the skies whilst trying paragliding, all with the opportunity to stay in incredible accommodation! From 5* spa luxury hotels with rooftop jacuzzis, chalets, pensions and apartments in the heart of central Mayrhofen, to pocket friendly self-catered apartments and cheaper options in the surrounding Zillertal Valley, Snowbombing has something for everyone.

Serious skiers and beginner boarders alike are all encouraged to hit the slopes with 650km of piste and the 78° gradients of Austria’s steepest slope The Harikiri (the steepest slope in Europe) is on hand for those feeling adventurous, plus lessons and plenty of beginner-friendly slopes to get to grips with for first timers. Black runs, blue runs, beer runs – there’s something for all abilities on Mayrhofen’s powdery peak district. Snowbombing has truly redefined winter sports holidays and shown what the ultimate alpine music festival looks and sounds like.