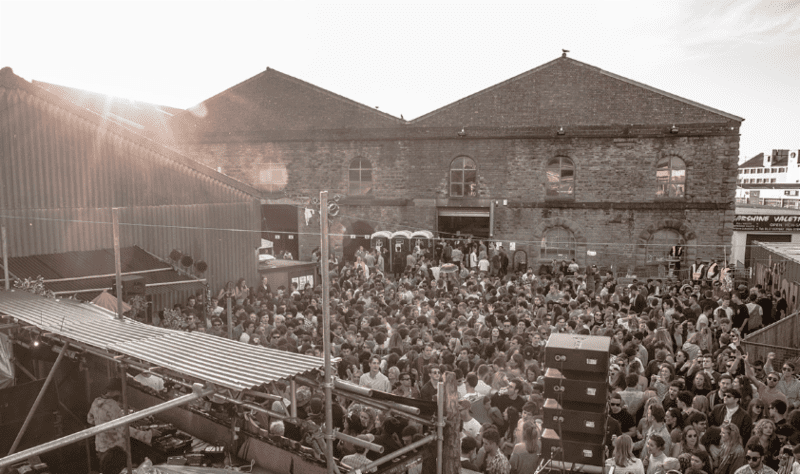 Who wants to be stuck in a basement or a warehouse when it's sunny outside? This Summer, Bristol's super club Motion are excited to unveil a string of outdoor parties and events, ranging from Outdoor Cinema to Euro Football Screenings, BBQ's, Beer Festivals, to all day parties showcasing the finest in electronic music.

June see's the first of many outdoor cinema screenings in Motion's Courtyard. Moon Light Movies will be showing Kevin & Perry Go Large! on Friday 10th June, a  perfect way to wind down from the working week. Moon Light Movies returns for it's second instalment on the evening of Sunday 12th June, with smash-hit musical Dirty Dancing.

On Saturday 11th June, Motion welcomes you to the Outdoor Euro Football Screening outside on their 20FT LED Screen, the perfect opportunity to sink a few beers and get patriotic for the first England and Wales group games. Football fans can also expect a gourmet BBQ, Ice Cold beers, music before, after and at intervals, inflatable footballs, astro-turf, table football and more. On the Saturday 18th June, Motion's Courtyard will be transformed into a tropical paradise garden, the Summer Solstice Garden Party will be the first of many outdoor daytime parties, think refreshing cocktails, BBQ delights and house and disco vibes, spun by the likes of Christophe, DBR & Autumn, Sleazy Sessions & more.

After the huge success of last year's Hospitality Bristol BBQ, the event will return to Motion again on the 2nd July, this time taking over not one but two outdoor spaces for the day to bring you an incredible array of beats, bass, food and drink with a selection of top artists including Camo & Crooked, Fred V & Grafix, S.P.Y, Toddla T, Chimpo & many more waiting to take you through from daytime 'til night. Let's Get Colourful also comes to Motion this July, for the outdoor immersive experience of colour, soundtracked by a selection of the finest House & Disco. Tickets include powered paint, water pistols and lots more to equip you for a once in a life time experience.

Motion are also excited to announce the Apex Summer Party, taking place in the Motion Courtyard on Saturday 16th July. For what will be Apex's first ever day party, punters can expect a full Funktion-One set up alongside an all star line up of house & techno and some real festival atmosphere, further news of the line-up coming soon. The legendary and much loved Defected in the House will be making its return to Motion this summer for 'The Road To Croatia', a Day & Night Party featuring MK, Riva Starr, Sam Divine, Simon Dunmore and many more.

Motion presents Sequences on Saturday 23rd July, an all day event bringing together 3 of the UK's most exciting bass music institutions, using 3 of the world's most powerful and revered sound systems. Sequences will be bringing Drum and Bass heavy weights Critical to Motion to present their biggest line up of all time, including a very special headline DJ set from Noisia. The second brand to feature at Sequences will be Deep Medi, Mala's prestigious dubstep and roots inspired record label, with the likes of Gorgon Sound, Commodo, Sir Spyro, Silkie, Kaiju as well as a headline set from Mala himself. Finally, Bristol promoters The Blast will be bringing the grime, bass and all round party atmosphere to the third arena with local legends Dirt providing the sound. Headlining the stage will be Grime's latest wonder kid Novelist, esteemed names like dubstep legend Benga, Northern powerhouse Levelz will also be on board, plus a very special guest to be announced in the coming weeks.

Motion will be hooking up with some of the best and most diverse Gay club nights across Bristol to bring you an entire day of quality underground music on the 13th August. Bitch, Please! are thrilled to welcome the very gifted Honey Dijon, an artist who combines old school Chicago house, disco, tech-house to tribal, funk, and soul. Also on board will be one of Europe's finest underground house and techno DJ's, and regular Berghain guest, Spencer Parker, known for his epic productions and widely supported remixes and re-edits. Horseplay, Switching Lanes, Amour Ami plus many more will also be spinning at the day time event.

The first ever Bristol Craft Beer Festival will take place from 2nd- 3rd September 2016 at Motion. The festival comes from the team behind London Craft Beer Festival, one of the UK's best-known celebrations of independent craft beers and breweries. Teaming up with Bristol Beer Week, the festival will be a grand finale to a stellar week of beer in Bristol and showcase the best of the Bristol craft beer scene alongside the wider craft beer community.