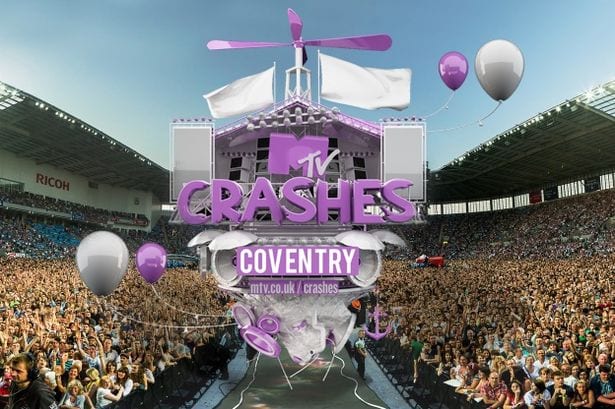 MTV UK today has announced The Chainsmokers, Pete Tong and Wilkinson as the first acts confirmed for Club MTV, Day Two of MTV Crashes Coventry. More acts still to be announced for this Midland exclusive set of performances. Expect super-charged sets from these electrifying performers as they take to the stage on May 28th, following the likes of Chase & Status, Sigala, Fleur East, Tom Odell and Kaiser Chiefs, who are all set to perform on Day One. MTV brings this incredible line-up to Coventry for just £10 per ticket, available via MTV.co.uk and Ricoharena.com.

New York DJ duo The Chainsmokers exploded onto the scene in 2014 with huge party hit ‘#SELFIE’. Since then the pair have been making a name for themselves in the Electro House and EDM worlds with their wild antics, hilarious personalities and unique productions ahead of their album set for release later this year. Expect massive tunes and a lively performance from the charismatic pair over the weekend.

The Chainsmokers say: “We cannot wait to get out on the MTV Crashes stage in Coventry – it’s going to be huge. We always try to make our sets fresh, different and exciting – this show will be no exception!”

Groundbreaking BBC Radio 1 DJ Pete Tong has held a commanding presence over the industry for more than two decades, possessing an unparalleled ear for new talent which has established him as a true icon of the electronic music scene.

Pete Tong says: “Sharing a stage with some of the most exciting up-and-comers in electronic music is going to be incredible – bring it on!”

Having collaborated with the likes of Ed Sheeran, Chase & Status and Katy B, Wilkinson has fast established himself as one of the most exciting DJs of the moment. With awards for ‘Best Single’, ‘Best Album’, ‘Best Video’, ‘Best Producer’ and ‘Best Live Act’ at the National Drum & Bass Awards in tow, the London producer is gearing up to release his second album in 2016.

Wilkinson says: “MTV Crashes is known for being a mad one so I’m excited to get out there!”

Following last year’s hugely successful MTV Crashes events, 2016’s Coventry showing will be held in a stadium, marking the first MTV Crashes event to do so. An experience guaranteed to bring the house down, MTV Crashes Coventry will be broadcast on MTV’s flagship UK music TV channels, shown in over 35 countries.

For further information on the event, head to www.mtv.co.uk/mtv-crashes-coventry with tickets on sale now at www.ricoharena.com. Individual day tickets are priced at £10 and combined two day tickets are now on sale through the link above.

MORE ACTS STILL TO BE ANNOUNCED
TICKETS ON SALE NOW, ONLY £10!
www.ricoharena.com
RICOH ARENA, COVENTRY, MAY 27TH AND 28TH
#MTVCRASHES