Music Fans Treated To An Incredible Day 2 Of Trnsmt As Amazing Performances And Brilliant Sunshine Turned Up The Heat! 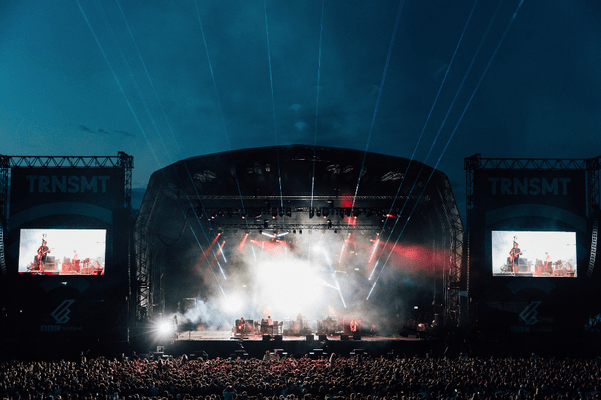 Music Fans Treated To An Incredible Day 2 Of Trnsmt As Amazing Performances And Brilliant Sunshine Turned Up The Heat!

Music fans at day two of the inaugural TRNSMT festival were blown away by incredible performances by headline act Kasabian, Catfish and the Bottlemen, George Ezra, The Kooks, Stormzy and many, many more as the sun shone down on Glasgow Green, creating an incredible and unforgettable atmosphere.

Fans were treated to an outstanding array of international stars, with some travelling from as far as Australia to catch their favourite band grace the Glasgow Green stage.

Cabbage got the party started opening up the Main Stage, treating the early arrivals to a high-energy set packed full of punk spirit and attitude. It was ‘T-shirt Weather’ for Circa Waves who brought the summer vibes to TRNSMT’s Main Stage.

QU0TE: Circa Waves frontman Kieran Shudall: “We all know Glasgow has the craziest crowds. That was beautiful! Glasgow is our most played city, we love you guys we’re so glad to be back!”

Good ‘grimes’ were had with man-of-the-moment Stormzy, who delighted the TRNSMT crowd with a fast-paced and thought-provoking set. His appearance on the Main Stage caused the TRNSMT crowd to erupt, bouncing from front to back especially when he dropped ‘Shape of You’ introduced as a track by one of his ‘brothers’.

QUOTE: Stormzy “This has been one of the best festivals and best crowds! There is so much love in here, this is a beautiful day”

Fans spread out around the beautiful Glasgow Green site today, basking in the sunshine and chilling out around the tree-lined fields. Popular areas included the exclusive VIP area featuring an array of tasty food stalls. Meanwhile in the Main Arena, the Utilita Power Tree, #SmirnoffHouse curated by Mixmag and Jack Rocks Stage offered up a mix of the best DJs, rock ‘n’ roll outfits and picturesque spots to enjoy cocktails and the surrounding music.

Fickle Friends and The Van T’s delighted crowds on The King Tut’s Powered by Utilita Stage, the latter flying the flag for Glasgow as the sun continued to bring the good vibes to the Green.

QUOTE: Fickle Friends “What a beautiful day in Glasgow! We had an interview earlier and someone promised me that no one would be left with a top on because this is f*cking summer!”

Festival favourites The Kooks promised fans a set of classics and did not disappoint, belting out the apt ‘Shine On’ and encore ‘Naïve’ to incredible roars. The crowd was beyond ecstatic as the band continued to play the hits throughout their set. George Ezra closed his performance on the Main Stage with chart-topper ‘Budapest’, complimenting the crowd for their immense singing. The anthem echoed through the site, and with the sun splitting the sky it was an epic moment for the first ever TRNSMT Festival.

With many acts proclaiming their undeniable love for Glasgow during their performances, it was an intense and awe-inspiring show for Gerry Cinnamon who made his highly anticipated return to a hometown crowd. After playing amazing shows around  in recent years, Gerry Cinnamon is a man who commands the stage with a voice and soul like no other.

With a truly buzzing festival site packed with 50,000 delighted music fans, TRNSMTfestival-goers were spoiled for choice on day two. The King Tut’s Powered by Utilita Stage featured brilliant performances from the likes of The Van T’s, Fickle Friends and a career-defining headliner performance from local heroes The LaFontaines.

And after what can only be described as an epic day of memories at TRNSMT, the famous Glasgow crowd showed no signs of slowing down, enjoying what could be hailed as the ultimate indie rock ‘n’ roll line-up with sets from Catfish and the Bottlemen followed by Kasabian’s headline slot.

Catfish and the Bottlemen had an awe-struck look on their face as the crowd sang back every word of their opening three songs. With Luke from The Kooks watching from the side of stage, Catfish and the Bottlemen dropped tracks including ‘Kathleen’, ‘Homesick’ and ‘Soundcheck’. A massive highlight of the second day, their army of fans and the sold out crowd were testament to their ‘big stage’ credentials. Playing a Bruce Springsteen remix in the middle of their rendition of fan-favourite ‘Cocoon’, Van and co left the crowd elated and ready for the Main Stage headliners.

CATFISH AND THE BOTTLEMEN: Van McCann “Glasgow! It’s the first TRNSMT as well. Great to be a part of it. Thanks for selling this place out!”

And as the sun began to descend on day two of the inaugural TRNSMT, Glasgow veterans The LaFontaines took to the King Tut’s Powered by Utilita Stage for a career-defining headline slot. Displaying their unique sound filled with funky hooks and showered in Glasgow patter, the five-piece owned the stage showing just why they're one of the most exciting bands to come out of Scotland right now.

Kasabian marched onto the stage like the ultimate rock ‘n’ roll stars in contrasting monochrome outfits; Serge with his signature headband in place and Tom hiding behind classic black wayfarer sunglasses. Commanding the stage as the beat kicked into the first song ‘III Ray (The King)’, the roar could be heard for miles.

The Kasabian set included the epic crowd pleasers ‘Ez-Eh’, ‘Shoot The Runner’, ‘You’re In Love With Psycho’, ‘Rewired’ and ‘L.S.F’. The absolute peak of the day was still to come though, as ‘Club Foot’, ‘Empire’, ‘Stevie’ and final track ‘Fire’ were dropped by the band causing the ultimate festival reaction of mass sing-alongs and hands in the air. Kasabiandelivered a set that was quite simply hit after hit and worthy of their headliner slot at this year’s festival.

QUOTE: Tom “Scotland that was fucking amazing, thank you, thank you! We’ve played here so many times but this has been the best yet. I can’t thank you enough!”

TRNSMT has brought an incredible atmosphere to Glasgow this weekend and with performances from Biffy Clyro, The 1975, Two Door Cinema Club, Twin Atlantic Blossoms, The Amazons and more tomorrow, all that remains is the final closing day of this year’s TRNSMT.

QUOTE: Festival Director, Geoff Ellis said: “It’s been a truly amazing second day at TRNSMT with brilliant performances from headliners Kasabian to the outstanding Stormzy. Tomorrow we are set to welcome headliners Biffy Clyro to Glasgow Green and we can’t wait to see everyone for the final day."

For fans heading to the last day of the festival, all stage times plus a handy timetable tool are available in the FREE TRNSMT app (available via Apple http://apple.co/2rtX83R and Android http://bit.ly/2qBq0nn) allowing fans to select the acts they want to see and they will be sent reminders before the set begins.

As always, fan’s safety and enjoyment is the top priority for festival organisers and we encourage all fans to take a look at the festival’s info page for all the latest travel, timings and event safety rules before making their way to this year’s festival.