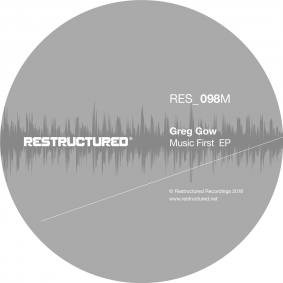 Fresh from his recent release on Dubfire’s SCI+TEC label, Greg Gow steps out on his own Restructured imprint with three more tracks of his unique techno, while Ian O’Donovan steps up to remix.

Greg Gow has long been a pillar of the underground dance music scene in Toronto, but he also has close ties to the Motor City. He has released on Derrick May’s legendary Transmat imprint as well as Kevin Saunderson’s hallowed KMS, and his unique brand of techno is imbued with real soul and gritty dub, clearly reflecting the influence of these two great cities. Last year he released his debut album on Jonny White’s Social Experiment to great acclaim, followed by his debut on SCI+TEC and now follows things up with this excellent EP that is set to further widen his audience in 2018.

The brilliantly nimble ‘Music First’ opens the EP with bouncy drums and well-crafted synths that bring a cosmic feel to the grooves. Serene pads linger in the background to bring that Detroit flavour, and filters add dynamism to the track to ensure it’s a thrilling ride.

The heady ‘Lofi’ is a little deeper and more heads down, with dubby drums driving forwards. Huge hi hat ringlets bring a classic techno feel and exquisite synth arpeggios unfold in the skies above to keep people marching. Ireland’s Ian O’Donovan is a techno veteran of labels like KMS and Tronic so is perfect to remix. He flips the track into something special with chords jumping up and down. It’s a fluid groove with metallic surfaces and smeared sounds all adding to the lush and futuristic feel.

Rounding out the EP is the brilliantly soulful ‘Eastern Market’, which has chunky house drums programmed in funky patterns. Woozy synths add to the playful feel of the track as it builds the pressure and keeps you locked.

This is another fine statement from one of the underground’s most cherished figures.