Music For Dreams event at Las Dalias, Ibiza with Laid Back, 4 August 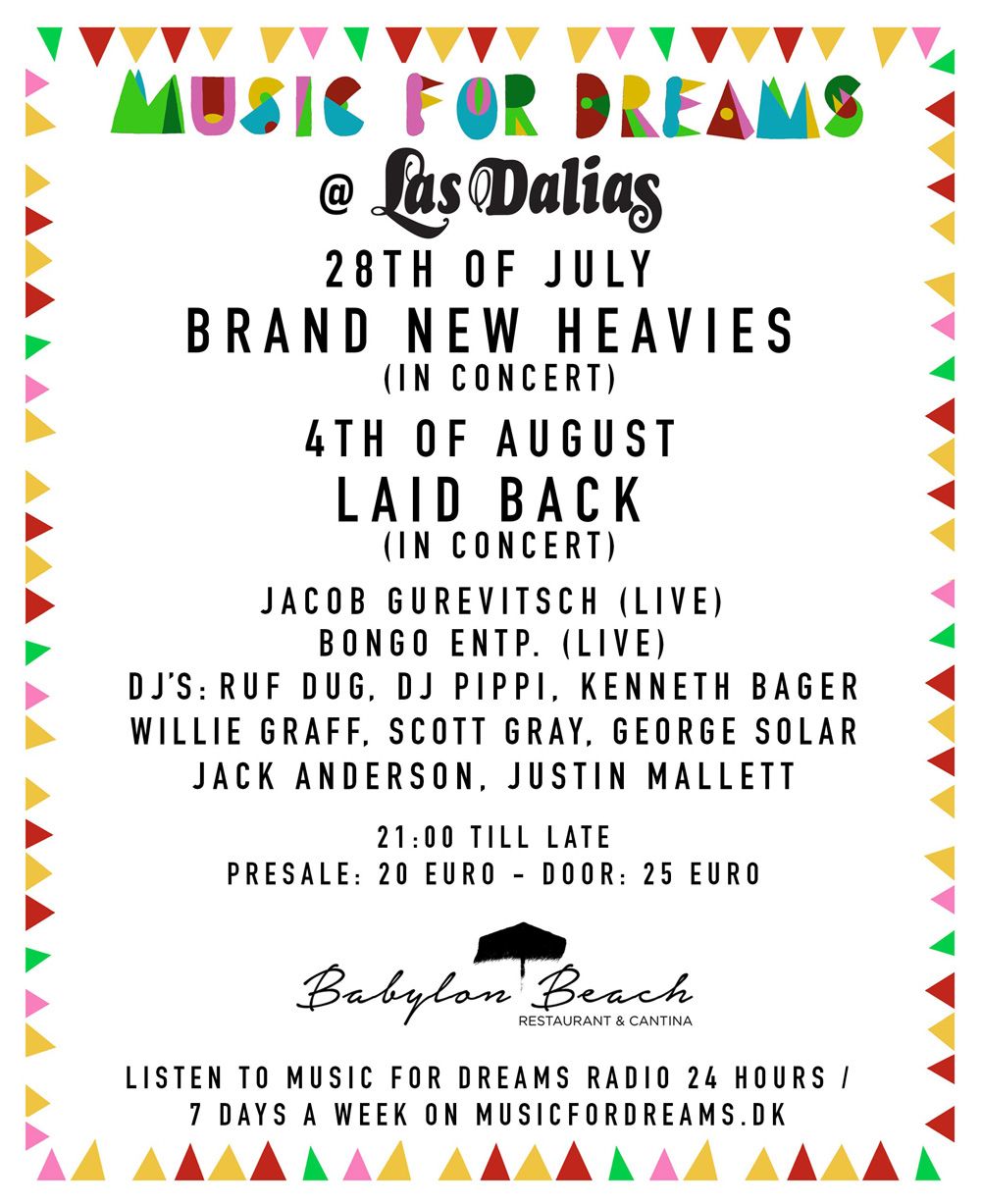 Music For Dreams event at Las Dalias, Ibiza with Laid Back, 4 August

Copenhagen’s Music For Dreams together with Vaughan (Pacha – Funky Room/ Babylon Beach) are returning to Las Dalias on Thursday 4th August 2016 for the second of three inspiring summer parties.

Headlining the event at Las Dalias Hippy Market will be musical legends Laid Back, who will perform a very special live concert. The Danish duo, who have sold over 35 million records worldwide, will be playing all of their beloved hits including ‘Sunshine Reggae’, ‘Bakerman’, the electronic masterpiece ‘White Horse’ and the modern Ibiza anthem ‘Beautiful Day’ – expect a very special – once in a life time concert – with stunning visuals.

Guitarist Jacob Gurevitsch will be performing too. He is most notably known for tracks on compilations such as Cafe Del Mar, and Buddha Bar, and his tracks ‘Mexican Margarita’ and ‘Lovers in Paris’ will be sure to please any Balearic aficionado.

Bongo Entp. will be the third live act of the night. Featuring percussionist and frontman Jacob Andersen, the band will be performing their Brazilian meets funky, world music soundtrack including  ‘Lujon’ and ‘Foto Feita Do Avia~o’, both standout cuts from the newly released album ‘Debut’ on Music For Dreams.

Carrying on the party will be original Ibiza DJ, Pippi, who has just released his beautiful debut artist album on Music For Dreams. Entitled ‘Bocadillos Variados’, it’s an exciting journey full of funky and Balearic grooves.

Also behind the decks will be Music For Dreams label boss, Kenneth Bager, who has also just released his brand new album ‘Premiere Classé’ featuring Damon C Scott (Storm Queen) and Danish actress Sophe Gråbøl – known from the cult TV Series ‘The Killing’. Kenneth is also known for his 9 years as a DJ/presenter on Ibiza Sonica Radio.

The parties start at 21:00 hours and will continue until very late…

Home of Ibiza’s legendary hippy market, Las Dalias has been on the scene since 1954. The iconic venue is located on the main road between Santa Eulalia and San Carlos and is one of the main congregating points for Bohemian Ibiza.

Entrance is €20 euros in advance or 25 euros on the door.