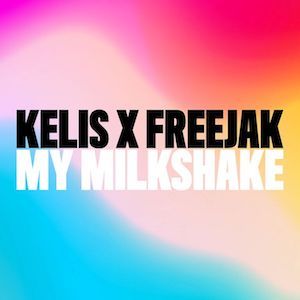 Freejak delivers a fresh and exciting interpretation of a true 2000s classic – Kelis’s global hit ‘Milkshake’ on ‘My Milkshake’, live across all DSPs on 6 July on Pitched Up / Columbia.

Featuring brand new vocals specially recorded by Kelis herself, brilliantly deployed alongside Freejak’s renowned twisted house and bass-infused production, ‘My Milkshake’ is perfect for Summer 2018 and is certain to bring all of the boys (and girls!) to the yard!

Originally written and produced by the award-winning duo of Pharrell Williams and Chad Hugo, AKAThe Neptunes in 2003, ‘Milkshake’ was originally released by Kelis in 2003 and is her biggest track to date, becoming certified gold in the United States and nominated for a Grammy Award. To date, ‘Milkshake’ has amassed over 80 million views on YouTube and over 90 million streams on Spotify.

On ‘My Milkshake’, Kelis said: “’Milkshake’ has been an important part of my career and it’s still fun all these years later. When I heard the remake from Freejak, I felt it was a dope version I could get behind. I had lots of fun re-recording the original vocal and re-introducing the song to a whole new generation.”

UK-based Producer Freejak has impressed some of the biggest names in dance music in just a short space of time, with support from Tiesto, Fatboy Slim, Oliver Heldens, Diplo, Martin Garrix, David Guetta, Nervo, MistaJam, DJ Target and many more. Freejak’s releases include ‘Somebody To Love’ with Mr. Belt and Wezol on Spinnin’ Deep which reached No.1 in the Beatport House Chartand spent six weeks in the Top 3 of the Beatport Top 100.

Freejak is also a highly respected remixer whose credits include reworks for Perfecto Allstarz (‘Reach Up’), Craig David & Sigala (‘Ain’t Giving Up’), Xpansions (‘Move Your Body’), Ryan Blyth(‘Show Me’), Tom Zanetti (‘More And More’), Lost Frequencies (‘Are You With Me’), and Wu Tang Clan (‘Gravel Pit’).

Born and raised in Harlem, New York, Kelis Rogers, better known by just her first name, first came to prominence singing the hook of Ol’ Dirty Bastard’s hit ‘Got Your Money’. Years of chart dominating songs and thrilling, boundary-pushing music followed resulting in millions of albums sold and numerous Top 10 hits.  She has released six albums, won Brit, Q, and NME Awards, and been nominated for two Grammy Awards. Kelis’s latest album ‘Food’ was praised as one of her most adventurous works yet.