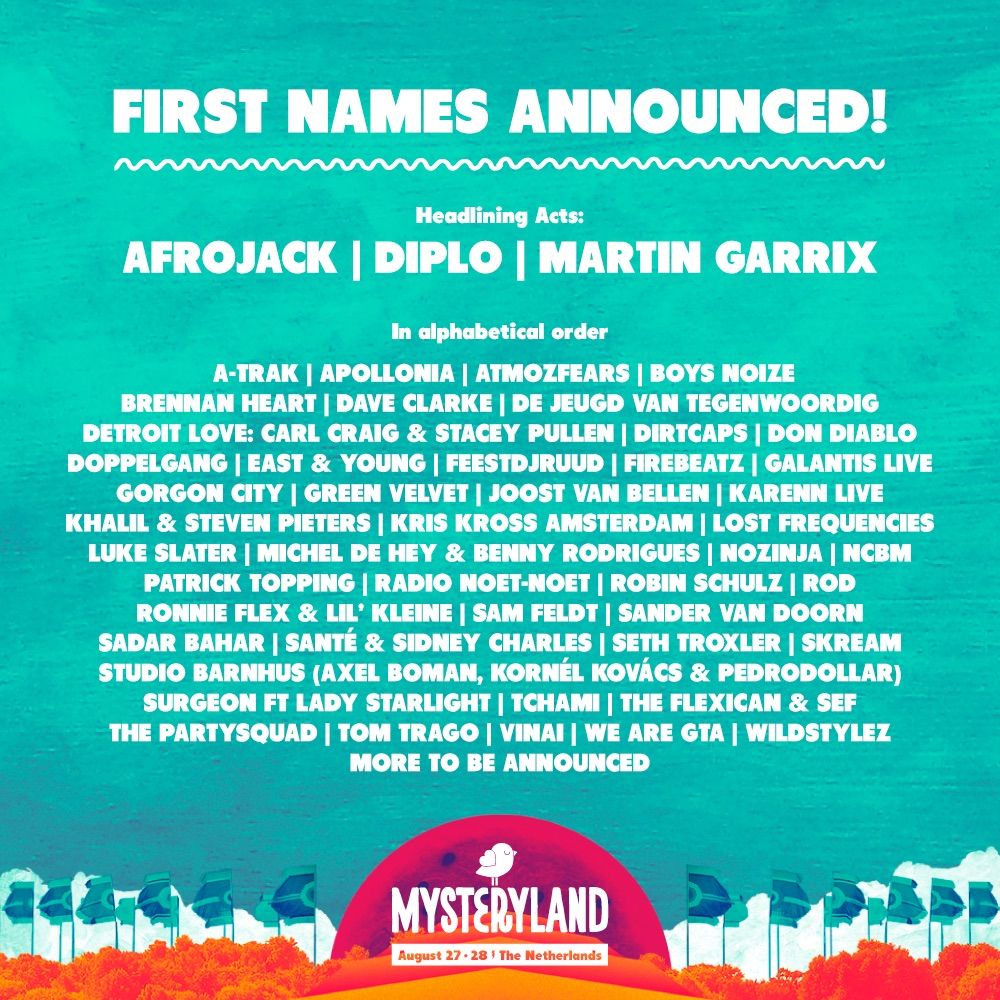 Mysteryland The Netherlands, the longest running dance festival in the world, proudly presents the first wave of acts confirmed for 2016. On Saturday and Sunday, August 27th and 28th, visitors can enjoy an entire weekend of adventure in a world of electronic music, art, and culture. An absolute audience favourite on the program is two-time GRAMMY winner Diplo, who is known amongst other things as Jack Ü, and for his Majorlazer act with the worldwide hit “Lean On”. Martin Garrix will perform again this year after a fantastic endshow performance at the previous edition. In addition, artists including Afrojack, Dave Clarke, Detroit Love (Carl Craig b2b Stacey Pullen), Galantis (live), Robin Schulz, Seth Troxler, Tom Trago and Wildstylez are also confirmed. The full lineup will feature more than 350 names and will be fully announced in April. Tomorrow, on Thursday, March 31st ticket sales begin via mysteryland.nl.

World Stars on the Mainstage
Diplo, who this year took home not one, but two GRAMMYs, will be closing out the Mainstage on Sunday in spectacular fashion. On Saturday, the honourable Dutch DJ and producer Afrojack who has worked with A-list stars including Beyonce, Madonna, and David Guetta will be gracing the decks. Radio hit machine Robin Schulz stands on the same stage, as does Galantis (live), Gorgon City, Tchami, Lost Frequencies, and Sam Feldt. Absolute hardstyle legends will be stomping the grounds at the Q-dance stage including Wildstylez and Brennan Heart. In the Spinnin’ Sessions tent, it is up to Sander van Doorn and Firebeatz.

Techno legends and industry influencers
Mysteryland features artists from all relevant electronic movements. On the roster we have Seth Troxler, Detroit Love (Carl Craig b2b Stacey Pullen), Dave Clarke, Green Velvet, Skream, Karenn, the live project from Blawan and Pariah, Luke Slater and ROD representing the more alternative range between house and techno. A special guest on the lineup is Lady Starlight, an American singer and performer who plays a pivotal role in the career of Lady Gaga. During Mysteryland she will be accompanied by techno legend Surgeon. Other acts on the program are Ronnie Flex & Lil’ Kleine, The Partysquad, and Kris Kross Amsterdam.

Installations by international artists
Kate Raudenbush, the American artist who in 2014 made The Wishing Tree for Mysteryland, is best known for her work on Burning Man Festival. This year, Kate will be responsible for the creation of the Mainstage, The world famous balloon artist Robert Bose, renowned for the Balloon Chain on display at Coachella, will represent an air display on the Floriade Terrain. The artist duo that is ATM will be building a gigantic permanent artwork on the festival site as a gesture to all local residents.

Camping this year is open an extra day to visitors
Last year, all camping tickets were sold out within two hours. Visitors who manage to bag such highly sought after camping ticket this year, are invited to stay from Friday until Monday at the Holy Ground Camp. This is also where the pre-party is held on Friday, and the after-party on Saturday.

About Mysteryland
Mysteryland began in 1993 and is the longest running dance festival in the world. The festival focuses on electronic music, art, culture, talent, and sustainability. Mysteryland has been awarded by Julie's Bicycle with a “3 Stars Green Industry Certificate” which is the highest designation for sustainability within the creative arts, music, and theater industries. The festival is rated three stars by A Greener Festival Award. This year, Mysteryland is celebrating a multi-day edition for the second time in the former Floriade Terrain in Haarlemmermeer. Extended international editions of Mysteryland take place at the foot of the Andes in Chile, and the legendary Woodstock '69 site of Bethel Woods in New York, USA. Mysteryland is a concept of ID&T. For more information and ticket sales visit www.mysteryland.com