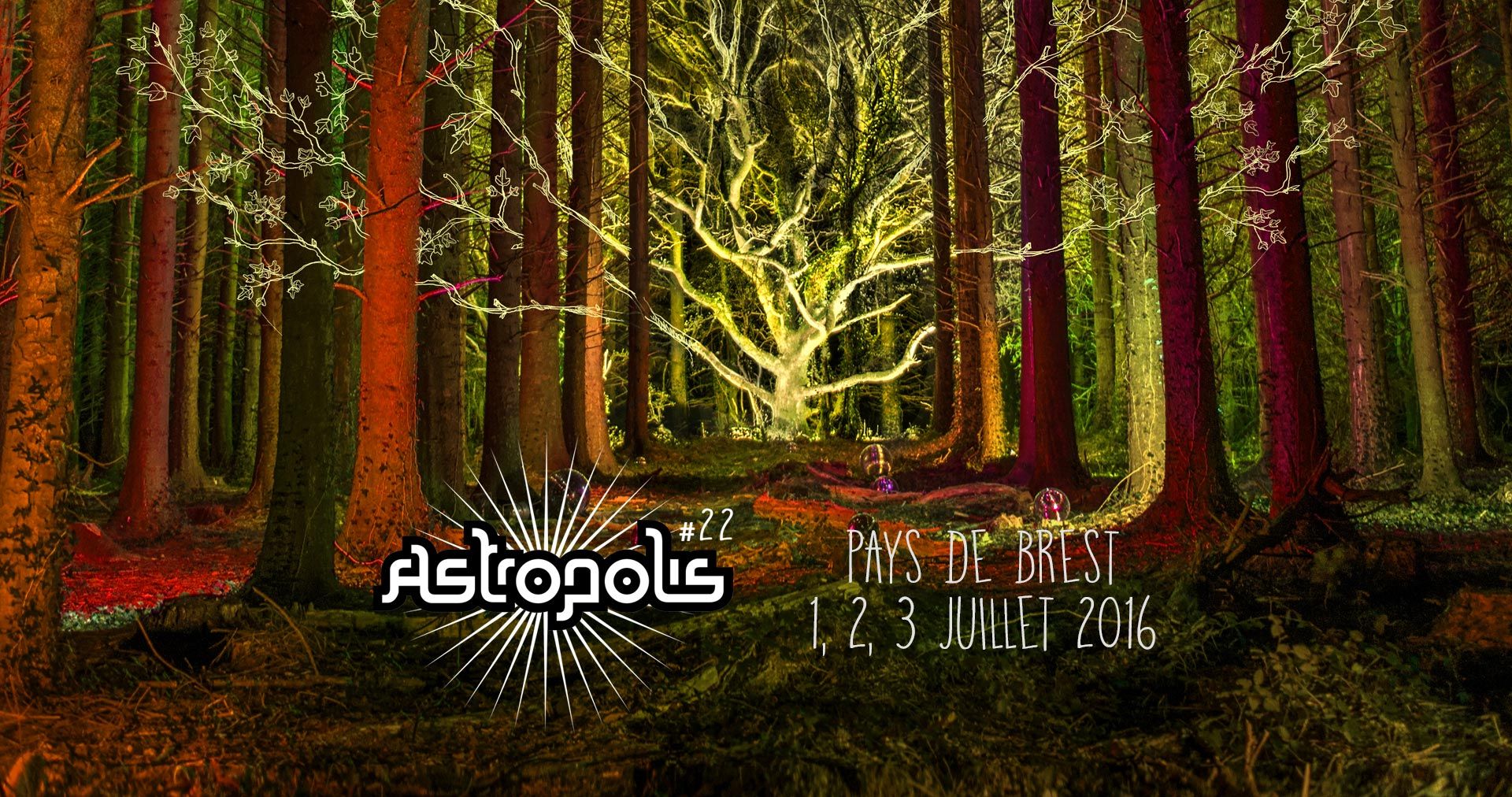 This year marks the 22nd edition of the french Astropolis Festival, held in Brest, from July the 1st through the 3rd. It’s time to unveil the night line up while the rest (day program) will be announced in a month.

Spotlight of these announcement, the artists scheduled for the three clubs parties, Astroclub, Bunker Palace and Cabaret Sonique as well as the ritual night in the splendid Keroual’s wood: a line-up created with the same desire since the first edition in order to gather all electronic music families in a unique event, to meet all generations and profiles of electronic music lovers and festival goers.

On Friday, La Carène will be turned into a BUNKER PALACE hosting a wild card is to the emblematic and prestigious Belgian team R&S, this electronic masterpiece build in order to dance since decades now. Newcomers as well as cornerstones members of the label are send by R&S for the occasion. Techno purists, electronica lovers or English-style basslines and inexhaustible dancers will be charmed with the label greatest ambassadors.

The Techno priestess Paula Temple will offer us one of her first 100% live performance beside the cosmic Electro provided by the live from Space Dimension Controller, the Synkro’s atmospheric Dubstep and the hazy Abstract supplied byAlex Smoke performing 2hrs live. Finally, Reenat, as a good father of R&S will kindly take care of us with his dancing tricks. An additional guest will be announced soon.

Just steps away from it, on the commercial harbor, the ASTROCLUB, with its epic, muggy and colorful dance floor, will welcome the groove-addicts with a sweet, warm and spellbinding house music on its sparkling sound-system.

Dancers will be carried away by the union between the hypnotic charm of Axel Boman with the enchanting know-how of the german veteran Roman Flügel. They will wear their widest smiles for the D.KO Records member Mad Rey from Paris and his funky and groovy universe. In the end, they’ll get dragged into the stormy and festive house with dutch flavour cooked by the prince Tom Trago.

On Saturday, in the mystical KEROUAL WOOD and its manor… Like usual, an epic and unique story will be related between meditative vegetation, historic heritage and enchanting decorations. There, the wildest souls and craziest night owls will gather for an unusual adventure, a kind of ritual and temporal night: a unique experiment in the night life landscape.

The night at Le Manoir de Keroual will host electronic music fineries as a delightful cocoon will do. It will be cuddled, honoured and danced through five universes specially designed for it, for almost 12hrs.

Fresh discoveries and shamanic incantations will exalt LA COUR stage. Runs by Unforeseen Alliance, the unpredictable quartet formed by Antigone, Birth of Frequency, Voiski and Zadig, the acid and abrasive techno supplied by Helena Hauff, the hypnotic loops from the Swedish magician Abdulla Rashim, the legendary Emmanuel Top’s ravaging acid techno (who’s making his return on scene after a decade of missing) and the monumental Andrew Weatherall. Maxime Dangles will present his new aka dedicated to techno live: DNGLS, and Madben and Yann Lean will put the finishing touch to this wonderful painting with their Trunkline project.

Delicious and explosive pleasures will run the huge ASTROFLOOR tent, with the New-York deep-house King Kerri Chandler,  the twilight melodies provided by Maceo Plex, one of the powerful Len Faki’s DJ sets and the ethereal and haunting House music played by our faithful friend Agoria. Shed, directly coming from Berlin will offer us one of his captivating lives whereas Electric Rescuewill introduce his new album ‘Parallel Behaviour’ with a live performance for his favourite Rave.

Unclassifiable UFOs and extreme sounds will be deployed under the crazy MEKANIK tent with the Planet Mu Records’ pillar Venetian Snaresand his improvised live somewhere between techno, break, acid and analogic weird sounds; the stage’s curator, Manu le Malin and the high priestess Elisa do Brasil ; hardcore music’s main figures Le Bask, Ophidian and Fracture 4. One additional guest is to be announced soon.

The creative strength of the youth will takeover the BILLBOARD STAGE under the reign of its 2016’ uncle: Blutch performing back-to-back with his mentor from Uncanny Valley, Cuthead.

The CHILL OUT space is not left out with promising Irezumi prospective ambient, the aerial side of the producer Manuel-M and the enchanting dreams from the Kompakt’s Pop Ambient division, sending us Wolgang Voigt, Triola aka Jörg Burger and the mysterious Unland.

Each year the festival has a delicious story to tell…

As always the last Astropolis basslines will shake in the mythic Vauban for a final CABARET SONIQUE grooving with the funky house of the German Damiano Von Erckert and the dancing know-now hand on by the Belgian Fred Hush. Our loyal friend The Driver (aka Manu Le Malin) will end on a high note the festival with a devastating techno dive that will highlight the cult motto of Astropolis: ‘Rave Up’ better than ever.

Let’s meet again next month with the day-events line-up such as Beau Rivage’s outside stage and cruises, with new artists, collectives take-over and with the DJ selected from the billboard.

Many thanks in advance for the echo you will give to this edition and feel free to contact me for further information.

You will find artists photos and our artworks in our press kit. Our resident Madben also made a mix to present the festival’s line up (link below) and you can watch our 2015 after movie below.

The website www.astropolis.org is online as well as the e-ticketing service, starting from €10 for a night to €55 for a 2-day pass.