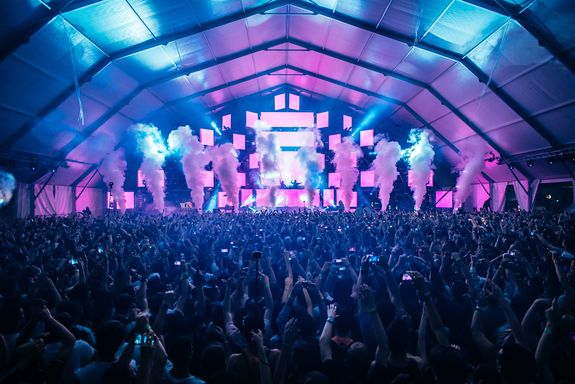 A SOLD OUT NAMELESS MUSIC FESTIVAL brought the Northern town of Lecco to life earlier this month. With a record number of 30,000 attendees for the special fifth edition, Lecco and neighbouring areas were filled to the brim with enthusiastic dance music lovers.

Opening the fifth edition with a special 3-hour DJ Set was none other than industry stalwarts The Chemical Brothers, whose electrifying set on the Thursday set the tone for what was an unforgettable weekend of music. Dazzling sets from headliners Axwell /\ Ingrosso, Zedd, and Afrojack entertained revellers until the final hours each night on the Main Stage, equipped with state-of-the-art pyrotechnics and LED displays. The Arc Stage saw packed out crowds from the opening afternoon, hosting Italy's finest hop-hop artists including the likes of Vegas Jones and Ghali, further cementing Nameless Music Festival's ethos of highlighting home-grown talents.

The Jäger Chalet, a brand new addition for the 5th anniversary edition, saw 100 lucky festivalgoers attend each day to witness exclusive sets from DJs who were hand selected by the stage hosts Run The Trap NL, Jägermeister and DJ Mag Italia. A surprise set from Milan-based, international star Crookers closed the stage on Sunday, rounding off the exclusive 'chalet' in style.

Both international and local talents wowed the crowds across all three stages, with Jauz, Kayzo, Malaa, Merk & Kremont, SLVR, Marble and more all treating attendees to unforgettable sets. Nameless Music Festival introduced a live stream on the festival's official YouTube channel, NMFTV every day from 4pm-12am, another first for the expanding festival.  15,000 viewers tuned in each day to catch their favourite artists perform and watch exclusive interviews all live from the festival.

As Italy's leading dance music festival, NMF's ambition to bring Italian dance music to the global market is well and truly being recognised. With dates already confirmed for June 01, 02 & 03, 2018, make sure to subscribe to all Nameless Music Festival socials for news and announcements on next year's edition.

The preliminary round of tickets for Nameless Music Festival 2018 are now on sale.

Releasing two tiers of early bird tickets for next years edition, festivalgoers can now purchase either NMF Experience tickets, which have limited availability at a special price of €49 for three days, or NMF VIP tickets for €139 for three days.

For further details and ticketing information, head to www.namelessmusicfestival.com