Neck Deep, As It Is, Boston Manor and A Loss For Words Lead Final Names For Slam Dunk Festival 2019 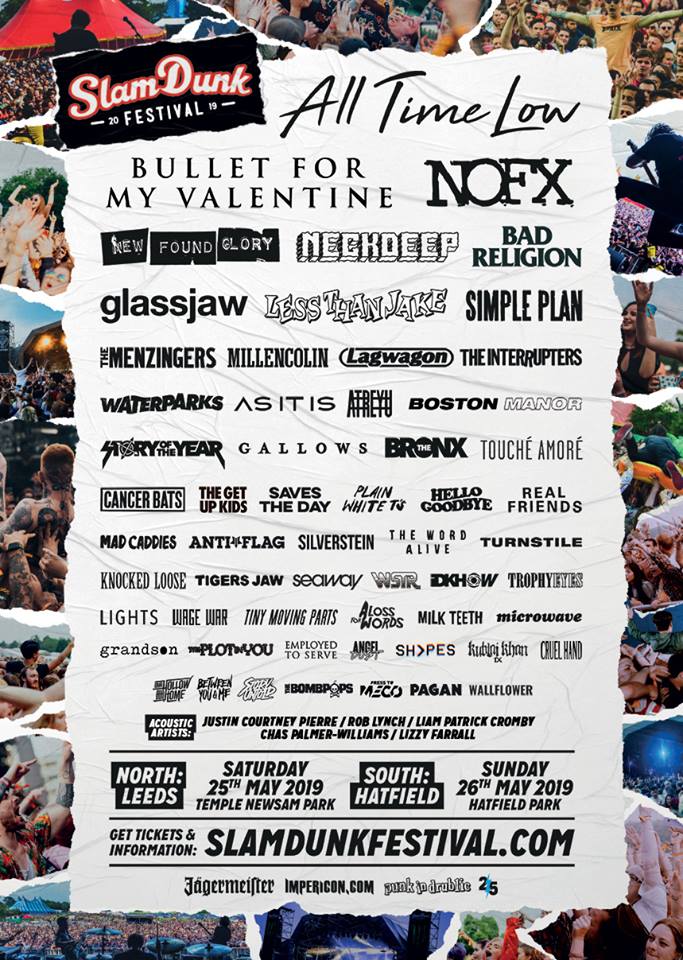 Neck Deep, As It Is, Boston Manor and A Loss For Words Lead Final Names For Slam Dunk Festival 2019

Slam Dunk Festival, the unmissable pop-punk party of the summer, is delighted to reveal the final mind-blowing names for 2019’s instalment. Pop punks Neck Deep, As It Is, Boston Manor, A Loss For Words, Grandson, Press to Meco, A Story Untold, Between You & Me, SHVPES, Kublai Khan, Cruel Hand. As well as these exciting new additions, Slam Dunk Festival have also announced the programming of the legendaryAcoustic Stage for the May Bank Holiday.

Fresh from storming across the UK’s monumental arenas with Don Broco, Neck Deepstand as one of the biggest British pop-punk bands of the 21st century. Their unapologetic twist on such a celebrated and classic sound has cemented their place as prominent movers and shakers of the scene. The Hopeless Records’ act kicked off their global tour ofThe Peace and The Panic at Slam Dunk Festival back in 2017 and they are returning full circle in 2019 to close the tour before they go away to start on their new album.

Starting from internet message boards between Brighton and Minnesota, pop-punk As It Is are set to return to Slam Dunk Festival this year. Latest album The Great Depression saw the quartet embrace darkness, melancholically exploring deep societal perceptions on mental health, masculinity and death. With this stunning reinvention, the Slam Dunk crowd can expect a theatrically delivery of anthemic tracks ‘The Reaper’, ‘No Way Out’ and ‘The Wounded World’.

Patty Walters of As It Is says;
"Words can’t even describe our excitement to be returning to Slam Dunk Festival. I’ve been attending Slam Dunk as a fan for nearly ten years now, and this year won’t be any different with such an unreal lineup of bands. We can’t wait to get rowdy with you at our biggest Slam Dunk yet. The crash is coming."

Following the release of their second full-length ‘Welcome To The Neighbourhood’,Blackpool favourites Boston Manor continue to cement their status as one of the most exciting bands in British rock music. Currently on a UK tour with last year’s Slam Dunk Festival headliners, Good Charlotte, the northern mob are demanding attention with driving guitars and devastating melodies. Boston Manor’s performance at Slam Dunk Festival this summer is guaranteed to have festival-goers hanging off every note.

Henry Cox of Boston Manor says;
“We’re very excited to be playing Slam Dunk again this year; it’s one of our favourite UK festivals. We’re gonna make it one to remember.”

A Loss For Words are one of the most iconic names in pop-punk. In their decade-spanning career, the Massachusetts troupe changed the course of the early 2000’s alternative scene for generations and remain as figureheads of the American pop-punk genres, inspiring many Slam Dunk Festival artists. Following their split in 2015, the band have chosen Slam Dunk Festival as their UK reunion on the 10 year anniversary of the album, The Kids Can’t Lose; their performance at Hatfield and Leeds will be packed full of undeniable classics for a masterclass in original pop-punk.

On making his Slam Dunk and UK festival debut, grandson says;
“This summer I and a small caravan of the baddest most diabolical rock and roll immigrants I could possibly assemble will be descending on your grounds to play my first ever festival outside of North America. I am not exaggerating when I say it is something I have been looking forward to my entire life, and my preparation, enthusiasm onstage, and general attitude will reflect that excitement I have. I can not promise you will agree with everything I have to say up there, I can not promise I will fit in with the rest of the music you will hear that day, but I promise it’ll get real fucking loud and real fucking dark. See you there. ✖️✖️”

Taking inspiration from the likes of SiKth, Everything Everything and Abba, Press To Meco are refreshingly creative in their musical pursuits. With soaring vocals and technical veracity, the Croydon three piece are set to make a storm at Slam Dunk Festival. Slam Dunk will also look forward to an energetic performance from Canada’s Story Untold who will deliver smooth pop-rock rhythms from across the Atlantic to Hatfield and Leeds. Australian natives Between You & Me are also set to join the Slam Dunk lineup with infectious hits like ‘Dakota’ and ‘Overthinking’ for a demonstration in pop-punk from Down Under.

After the huge success of Slam Dunk’s move to Hatfield House last year, Slam Dunk North will move to Leeds’ Temple Newsam Estate so even more pop-punk fanatics can make their way to the definitive date of the alternative diary. Reaching across two stunning greenfield sites in Leeds and Hatfield on Saturday 25th and Sunday 26th May 2019 – Slam Dunk 2019 is the next evolution for that go-to destination of rock.