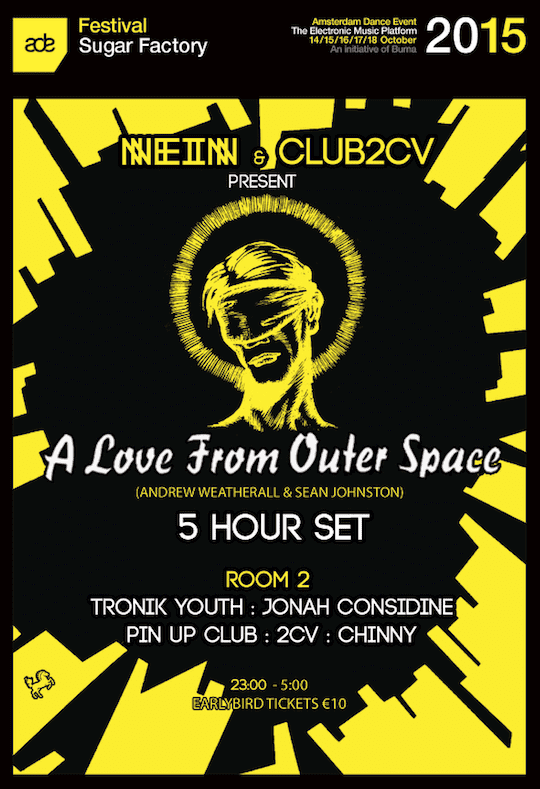 A Love From Outer of Space is a cult icon affectionately known as the Guvnor, Andrew Weatherall and Sean Johnston from Hardway Bros.  Together they created the ALFOS phenomenon and will be hosting the main room all night long for a solid 6 hour set.  The purveyors of the hypnotic formula draw inspiration from all genres of music and never exceeding 122 beats per minute, the boys are no strangers to Amsterdam but will be performing for the first time at ADE Festival.

The ALFOS dedicated followers known as cadets are fast becoming an international army whom travel four corners of the planet for their cosmic fix, from warehouse spaces and basements, cricket clubs and festivals, to fairytale castles and churches.  The much adored chug pioneers are guaranteed to raise the bar with A Love From Outer Amsterdam at the Sugar Factory for the Nein party on the 14th October.

“Nein Records first hit the Amsterdam Dance Festival in 2014, where they made a pretty big splash introducing Justin Robertson, Morgan Hammer and Man Power to the event. This year, they have joined forces with the guys from the highly influential Club 2CV, who have been running underground parties all over Amsterdam for a number of years and have produced some of the best parties that ADE has seen. Together, we present A Love From Outer Space at the Sugarfactory on the opening night of the festival.  Dubbed THE ADE hot ticket of the week. It’s also the first time ALFOS play at ADE”     Ian  Considine (Nein )