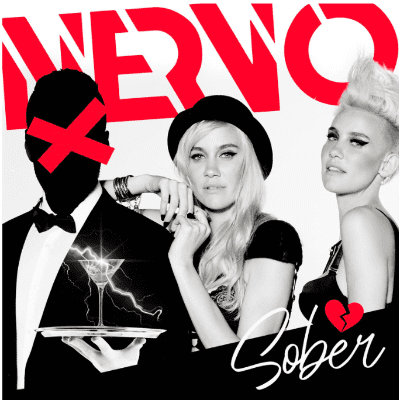 Australian duo NERVO have unveiled heartfelt new single ‘Sober’, out on Friday 17th May via Universal.

After a year-long hiatus, the sisters’ second release of 2019 is an emotive vocal house track, with lyrics alluding to the sobering realisation that comes attached to a breakup. With a slick production packed with electro synths and rhythmic beats, ‘Sober’ is topped with Mim & Liv’s powerful vocals and establishes the release as a track set to make a huge impact on charts and dancefloors alike this summer.

The pair explain: “We wanted to make a record that worked on the dancefloor for the summer but also had  some lyrical  substance. We’ve all had  those SOBERing  moments  when  you  realise  a relationship  isn’t  what  you  thought  it  was  and  this  is  what  this  song  is  about. It’s a melancholy summer song. Hopefully people will be able to relate while having a dance at the same time.”

The acclaimed duo kick started their career by writing Grammy-winning hit ‘When Love Takes Over’ for David Guetta and Kelly Rowland in 2009, NERVO have since penned tracks for some of the biggest artists in the world, including Kylie Minogue, Ke$ha and Armin Van Buuren. Utilising the same songwriting skills for their own material, the duo have parallel levels of success with tracks ‘You’re Gonna Love Again’ – amassing over 18 million views on YouTube – and 2013 hit ‘Hold On’, which made it to #1 on the Billboard Club Play chart.

Alongside writing for a wide-range of globally recognised artists, NERVO have worked on a string of high-profile collaborations with the likes of Nile Rodgers, Steve Aoki, Afrojack, Dimitri Vegas & Like Mike and Nicky Romero soon followed. ‘The Way We See The World’ with Afrojack and Dimitri Vegas & Like Mike became the official anthem of Tomorrowland 2011, whilst working with Romero saw them land their first Beatport #1, with single ‘Like Home’ topping the chart for three consecutive weeks.

Last year’s collaboration with Sofi Tukker, The Knocks & Alisa Ueno on viral hit ‘Best Friend’ was picked up as the official launch song for the iPhone X campaign. The track became yet another #1 on iTunes for NERVO, reiterating their status as one of the world’s most successful dance acts.

Similarly talented in the DJ booth, NERVO have appeared on the main stage of some of the world’s biggest electronic events, including EDC Las Vegas, Creamfields, Tomorrowland and Ultra. Clocking in at #16 on the DJ Mag Top 100, they kick off extensive global tour on Saturday 1st June.