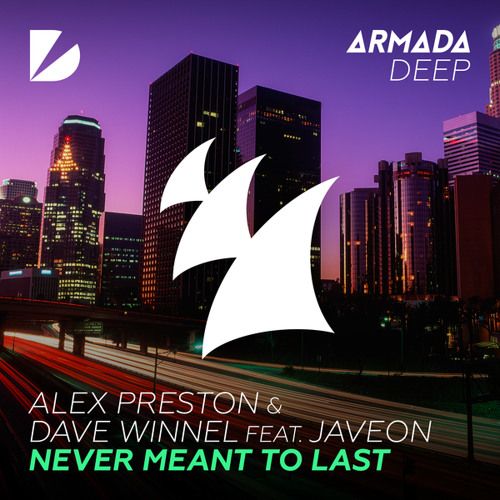 Staying true to their mantra, Armada Deep have unearthed another dance-floor track with real crossover potential. Whether it’s in the club or on the radio, this Anglo-Antipodean love affair between Alex Preston, Dave Winnel and Javeon is definitely going to last.

Alex Preston and Dave Winnel have crafted a track that is primed to kick-start the build-up to the summer season. Never Meant To Last is one of those wondrous tunes that harps back to the glory days of uplifting house music whilst being ahead of its time in terms of where the genre is at currently – something that obviously didn’t go unnoticed by the Armada A&R team.

Javeon, whose previous collaborations include monster dance records with DJ Zinc, Le Youth and Cyril Hahn, provides stunning vocals and a beautifully evocative theme. His delivery is a perfect fit for a record which isn’t quite deep house, but doesn’t stray too far into future house territory either; it’s a hybrid, a fresh and distinguished one at that.

Coupled with a VIP mix that’s been going down a storm in clubland, Never Meant To Last is setting the stage for summer festivals already.