New night People From Ibiza heads to Amnesia for summer! 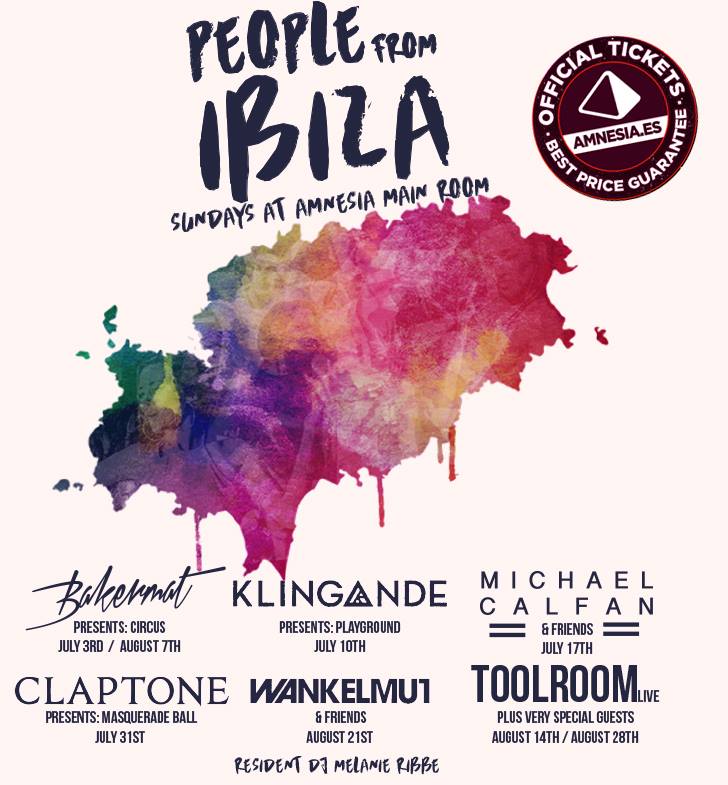 New night People From Ibiza heads to Amnesia for summer!

We are thrilled to present you People from Ibiza, the night that is set to take the white isle by storm this summer, at the one and only Amnesia.

Since the late 70’s, revellers have travelled from all corners of the world to experience the magic that occurs within the walls of Amnesia. Every Sunday from 3rd July to 28th August, the majestic main room will play host to a number of exclusive artist and label showcases with the most in demand artists across the globe coming together, under the People From Ibiza banner. This party is to set get your heart racing with the likes of Bakermat, Klingande, Michael Calfan, Claptone get ready to descend and host their exclusive parties! Each artist bringing their own flavour to the event, no one party will be like the other. Sunday evenings in the beautiful Ibiza will get a breath of fresh air with the melodic sounds of People From Ibiza….

For our opening party we will see Dutch superstar Bakermat, whose signature sound, deep house with jazz and soul influences, has attracted much attention in such a short amount of time. With his growing popularity across Europe, he is best known for mixing jazz elements and live instrumentation into his sets. Tracks like the gospel flavoured ‘Teach Me’ and ‘I Have a Dream’ teamed with his European shows often sporting an entire live band exhibits his flair. His melodic sets are always filled with joy and happiness to match the famous Amnesia vibe. Bakermat is just the first in a long list of lively headliners at People from Ibiza this season.

Headlining another of our parties, hailing from France, we have Klingande. Born Cedric Steinmyller, the French deep house producer is inspired and recognised by Bakermat, Kygo and Klangkarussel and is currently championing the melodic house genre with his number one hit ‘Jubel’, featuring classic and soulful sounds from the talented Lovely Laura’s saxophone, which she will be bringing to Klingande’s Amnesia performance. Despite only having been a name in the dance music scene for four years, Klingande has spent much of the last two touring all over Europe as well as in the studio, having just released his brand new single ‘Losing U’. We look forward to welcoming this star to People from Ibiza.

With his 2015 hit ‘Treasured Soul’, fellow Frenchman Michael Calfan joins our mammoth list of headliners this summer. Discovered by Bob Sinclair a few years ago, he is back again this year with another upbeat smash ‘Nobody Does It Better’, which has already gained over a million SoundCloud plays as well as live support from Oliver Heldens, Pete Tong, Avicii and Tiesto. His love of different genres and having absorbed these sounds for years while also producing music in a variation of styles results in something of a specialty for dance floors out there.

SUNDAY 31ST JULY: FULL LINE UP TO BE ANNOUNCED

Since arriving on the scene five years ago, the enigmatic artist, known only as Claptone, has earned the favour of industry peers and fans alike under the veil of a golden mask. His appearance at People from Ibiza will witness him bring his highly exclusive Masquerade Ball to the club. The Berlin-born artist is planning to host a small number of exclusive shows rolled out across Miami, London and now Ibiza. We’ll provide all the masks, you just come down and get ready to dance the night away with the hypnotizing sounds of Claptone!

UK house heavyweight Mark Knight brings his flagship brand Toolroom Live to Amnesia this summer. With a career spanning more than a decade and a stellar reputation in the electronic music scene, the Grammy-nominated DJ/producer has never rested on the laurels of being one of the industry’s most respected and accomplished  players. Armed with a music library that knows no boundaries, he is sure to deliver high octane sets, which treble their way right across the dance music spectrum causing dance floor carnage across the world. Founder of Toolroom, this has become one  of the biggest selling label on Beatport. Toolroom has become a byword for cutting edge sounds and innovation within contemporary dance music.

Best known for 2012’s global dance smash ‘My Head Is A Jungle’, Wankelmut, real name Jacob Dilßner, rose to fame when his unofficial remix ‘Reckoning Song’ went viral after being posted on his SoundCloud. A Berlin based producer, Wankelmut is able to match classic house styles with a more continental palette, helping him to obtain respected and recognized status, winning Newcomer Of The Year at the Electronic Music Magazine GROOVE.

VERY SPECIAL GUEST TO BE ANNOUNCED