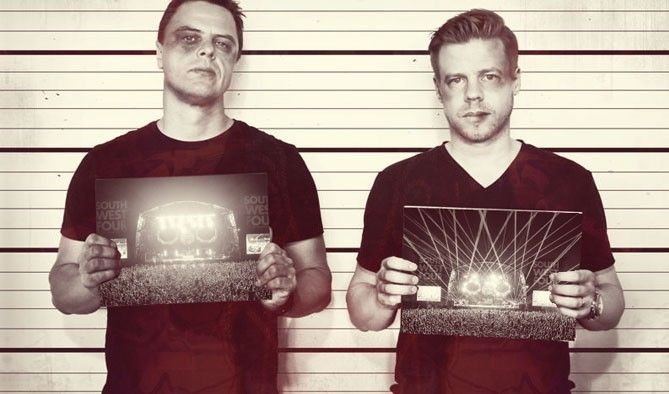 With over thirty of the greatest acts the electronic music world has to offer now announced for South West Four 2014, our mission to be the crowning glory of London’s clubbing calendar is well underway. Recent announcements have focussed on the underground house and techno acts joining us this summer including Seth Troxler, Guy Gerber, Tale of Us, Better Lost Than Stupid (UK debut) and Paco Osuna for the Saturday, whilst Eats Everything brings Edible to SW4 Sunday. With our ticket sales continuing to break all previous records, we now turn our focus to the addition of five new additions including the London debut of a brand new act that brings together two legendary trance figures, who join Above & Beyond on the Saturday main stage. Hold onto your hats people…

Two undisputed electronic heavyweights. Two titans of trance. One unstoppable force. South West Four is pleased to announce that on Saturday 23rd August, Markus Schulz and Ferry Corsten will arrive in London to showcase their new project New World Punx for the very first time. After starting out as just a few spontaneous back to back DJ sets in 2012 it became clear that this was a partnership that could inevitably take on the world as one. Both globally celebrated in their own right thanks to individual careers spanning over twenty years, New World Punx demonstrate remarkable levels of chemistry through scintillating performances. Deriving from Schulz’s hit ‘The New World’ and Corsten’s anthem ‘Punk’, New World Punx push a bass-driven sound that promises to shake Clapham Common to its core. Having marked their territory with unforgettable appearances at ASOT 600 (Madison Square Garden NYC), ASOT 650 (Netherlands) and Ultra Miami 2014, their first ever performance in the Capital promises to become one of this year’s most cherished moments.

Cosmic Gate are the perfect union of musical minds. Over the past ten years, Nic Chagall and Bossi have evolved into one of the most creative and highly-sought-after electronic acts in the world. With the world of trance unfolding into various different pockets of sound, Cosmic Gate have remained true to their roots and catapulted themselves to the forefront of euphoric sounds. Their cosmological productions go hand in hand with their atomic on-stage synergy to create one of the most powerful partnerships of today. Feeding off each other’s endless energy and turntable wizardry, the German duo have established themselves as a firm favourite within trance’s global community. They played a pivotal part in Armin van Buuren’s ASOT residency at Privilege Ibiza last summer with five standout performances alongside the launch of their brand new residency in Las Vegas. With a mouth-watering SW4 debut to look forward to, Cosmic Gate’s most recent London performance at The Gallery earlier this year saw them rock the Ministry of Sound through to the early hours. With demand already crying out for their return, this emotive performance promises to seduce the senses into a heavenly abyss.

Boasting an unrivalled level of telepathic musical chemistry, Sunnery James & Ryan Marciano have firmly established themselves as one of the hottest duos in electronic music. Their insatiable appetite for success and ability to deliver electrifying sets has led them to a brand new summer residency at Amnesia Ibiza for 2014. Last season, their chunky house-based grooves were amongst the most popular on the island via their Sexy By Nature residency at Boom Ibiza, in addition to outstanding performances at SW4’s Tenth Anniversary, Ultra, Tomorrowland, Electric Daisy Carnival, BPM, and the Amsterdam Dance Event (ADE). Following this their efforts were rewarded with a high profile residency at Las Vegas’ Hakkasan, a headline show at The Heineken Music Hall, as well as a BBC Radio 1 Essential Mix earlier this year. Besides their carnival-like performances, the key to their success is their outstanding productions which will once again bring sunshine to our beloved Clapham Common.

At just 18 years of age, Danny Avila has become one of the hottest new acts in dance music. From winning ‘Best Newcomer DJ’ at the prestigious Vicious Music Awards aged only 16, through to touring the world last year, Avila has risen through the electronic music ranks based on his searing ability to demolish the world’s most prestigious dance floors. His production talents have seen him gain heavy support from Hardwell, Tiesto, Avicii and Nicky Romero, with releases on the likes of Interscope Records, Big Beat Records, Spinnin’ and Musical Freedom. Having supported Tiesto at a sold out Earl’s Court last December, in addition to several standout performances at Ministry of Sound, Danny’s relationship with the Capital is already an inseparable one. This will be evident in force when he arrives at South West Four on Saturday 23rd August.

Another act making his SW4 debut in 2014 is German producer Jerome Isma-Ae. A firm favourite at The Gallery (Ministry of Sound) after stunning crowds with his dark and broody beats in recent months, Jerome has become renowned worldwide for combing key elements of trance and techno with exquisite drum patterns. As a producer of unique and distinguished basslines, Jerome has become of the best-selling and most in-demand progressive house acts on the planet. His beautiful back-catalogue varies from subtle crafted layers of instantly recognisable beats to peak-time dancefloor sensations.  As an act that has embedded his signature sound whilst constantly adapting at the same time, Isma-Ae draws influence from as far as rock, metal, classical and drum & bass, making him one of this year’s most interesting debutants.