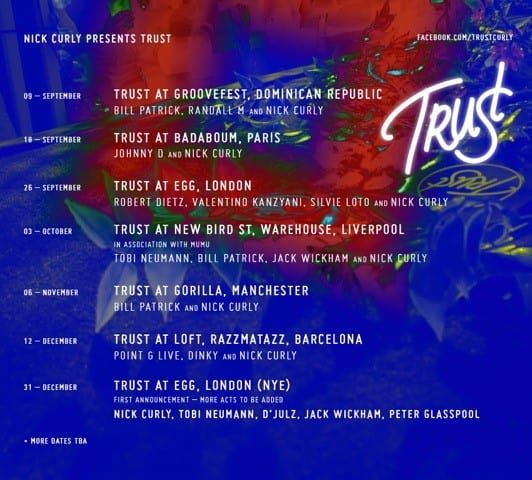 Nick Curly’s Trust label and event series is now well established around the world having partied at off Sonar, Edit in Amsterdam as well as Found in London and many other clubs around Europe. Now the crew can unveil their autumn plans, when they promise to keep a true house & techno vibe alive.

The 26th Sept sees the boss join up with Robert Dietz, Valentino Kanzyani, Silvie Loto for Trust at EGG London, then for mUmU in Liverpool in a big warehouse on the 3rd October Bill Patrick and Tobi Neumann link with Nick and Jack Wickham. Then Trust take over the intimate Gorilla in Manchester with Bill Patrick  on the 6th November, 12th December sees Trust take over Razzmatazz in Barcelona with Point G playing live alongside Dinky and Nick, then New Years Eve will be spent at EGG with D’Julz, Tobi Neumann, Jack Wickham and more to be announced too.

Expect nothing less than cutting edge house and techno from some of Europe’s best DJs and you will no doubt be left wanting as Trust continues to show that the hype is to be believed.