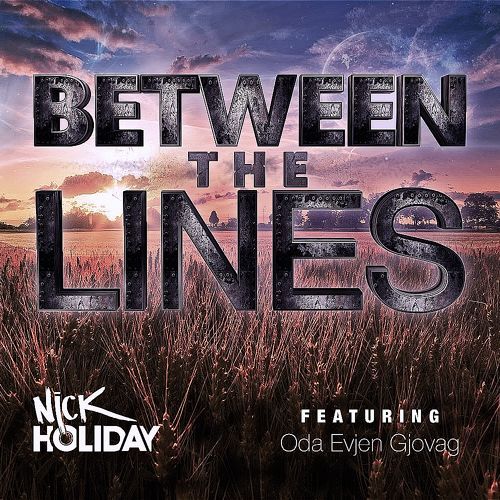 This Californian production whizz is getting the crowds hyped both locally and internationally on the web with a steady string of releases that he’s rolling out and this month’s treat comes in the shape of the vocal fireball ‘Between The Lines’ featuring the gorgeous vocals of Oda Evjen Gjovag. Nick Holiday is making a serious push on for global domination as he continues to refine a sound that’s already giving the big boys a run for their money.

Thudding kicks and layered claps lay the base for Nick’s no-nonsense intro, which wastes no time in announcing ‘Between The Lines’ as a rough and ready production that’s not holding any prisoners in the energy department. Swirling and rising in frequency, the risers introduce a slippery spool of snare rolls and FX twirls that crescendo into chaos as the first bass heavy drop bangs on the minute mark where your educated DJ wants that first release of action, which is duly dispatched.

The main body of ‘Between The Lines’ pulls attention to Nick’s classy synth modulation and precise control as the electrified leads thrash around the middle frequencies, leaving the bottom end clean for the mechanical kicks to do their work on the subs with no interruption. The bespoke pitch bent leads are a million miles away from generic one-note mono arrangements that make up large chunks of big room beats in 2015 – proof if you ever needed it that we’re hearing the sounds of a talent that’s pushing forward. Nick’s highly-creative complexity and layers of nuances and sonic detail proves that this style can still be done without sounding like everything else before it – whilst still retaining the qualities needed to keep the masses coming back for more. Singing true to his desire to bridge the gap between main-room and commercial – Nick’s bang on the mark when it comes to wrapping together two worlds that can easily contradict if done wrong.

Keeping to the theme of adding multiple sounds and ideas into one piece, the breakdown calls upon a whole new stack of leads, this time a blissful plucked chord stack that rolls out the red carpet for Oda Evjen Gjovag’s introduction and the standout euphoria moment of the single. The vocals are clean, saturated in FX to taste and offer a total contrast to the hectic main instrumental parts. Fading away into the distance the tension returns into yet another riser that’s full of textures and more new sounds before the inevitable return of the stomping finale.

Nick’s done a fine job on ‘Between The Lines’ – breaking the code to a sound that’s often tagged as “all sounding the same”. The fact is there’s plenty of gas left in the tank for big and bold vocal anthems, it’s just a case of finding the right people for the job and Nick’s definitely one of those guys. With plenty more lined up in the months ahead – you can bet your bottom dollar we’ll be hearing plenty more from this clued up and technically proficient producer.