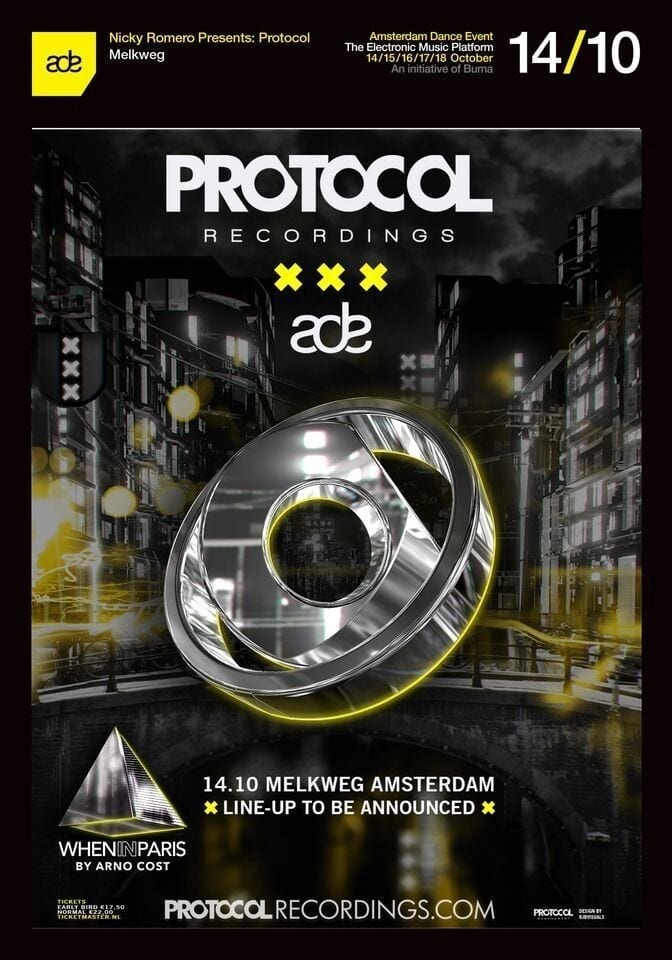 Nicky Romero will once again mark the official opening of this year’s Amsterdam Dance Event with the return of his innovative Protocol concept party at the legendary Melkweg on 14th October 2015.

In what has become an annual tradition for the Protocol Recordings chief and global brand ambassador, Romero returns to one of Amsterdam’s most iconic venues for what is set to be yet another groundbreaking performance. Promising an all-star cast of Protocol talent, one of the best sound systems Amsterdam has to offer, not to mention surprise special guests that have previously included the likes of Martin Garrix, Afrojack, Fedde Le Grand and David Guetta, if past years are anything to go by, there’s only way to kick off ADE this year.

This year Nicky will also be joined by good friend and Protocol partner-in-crime, Arno Cost who is set to take over the second room of Melkweg for the Dutch debut of his innovative ‘When In Paris’ concept. Continuing to carve his reputation as one of the most promising French house talents, Arno’s intuitive blend of electronica, disco and house has earned him high praise from some of the biggest names in the business, not to mention increasing demand from fans the world over.

Startling life as a radio show intended to celebrate Cost’s musical influences back in January, in just a few short months Arno has been working tirelessly to evolve the show into a lifestyle concept dedicated to feel good house music. Debuting in the old art deco cinema, YOYO (Palais de Tokyo) in Paris on September 4th, this will be the first time Arno has taken the night outside of his home country and is sure to be pulling out all the stops as a result! Bringing with him a diverse and refreshing line-up set to include international DJs, both collaborators and friends, as well as handpicking up and coming French talent to showcase the very best that his nation has to offer and embrace the freedom and joy of house music. Adopting a ‘one night only’ philosophy for his nights, with stunning visuals and melodious beats, prepare to be lost in a night of pure euphoric vibes.  Not one to rest on his laurels, Amsterdam is just the tip of the iceberg for Cost who has set his sights on exporting his When In Paris shows right across Europe, Asia and The Americas moving into 2016. For more info head to www.wheninparis.fr