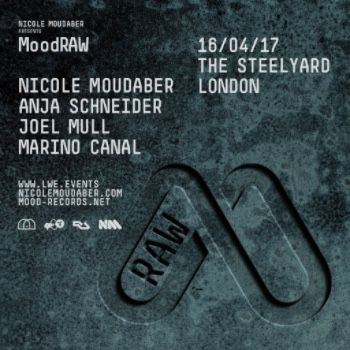 Nicole Moudaber is an event promoter, record label founder, radio host, and one of the most passionately followed DJ/producers in the world. In 2014, she headlined the sold-out MoodRAW tour, set in off-the-grid warehouse venues from Los Angeles to London, and on the back of yet another fantastic year, she is returning to London alongside an all-star line up with the brand.

2016 and the beginning of 2017 has seen Nicole release records through esteemed imprints including Adam Beyer’s Truesoul, Carl Cox’s Intec, Suara, and of course her own label Mood, the latest of which dispatching in the form of the ‘Love Someone Else’ single, with Skin from Skunk Anansie, and backed with a plethora heavyweight remixers. Her hit remix of Alcatraz house classic “Give Me Luv” (on Deep Dish’s Yoshitoshi) used bass,drums and silence to make a moment so big, it was used by DJs of all stripes. The track won "Best Tech House/Techno Track" at the 2016 International Dance Music Awards, and was the No. 1 techno track of 2015 on online retailer Beatport, making it one of the year’s Top 20 tracks overall.

On the DJ front, Nicole has also continued her fine form, touring the globe, hosting her own events and festival stages, and performing in Japan, South America, UAE, Singapore, Indonesia, Lebanon, Mexico, Thailand, and America as well as playing Europe’s hotspots. Nicole Moudaber often brings different elements of her style and taste to life, especially under her own MOOD banner, showing her roots as a party promoter, and a New York City clubber during the golden age of the resident DJ.

The MoodRAW concept is simple: going back-to-basics with only an intimate venue, a darkroom and a powerful sound system. The atmosphere is moody and raw… its ‘MoodRAW’.