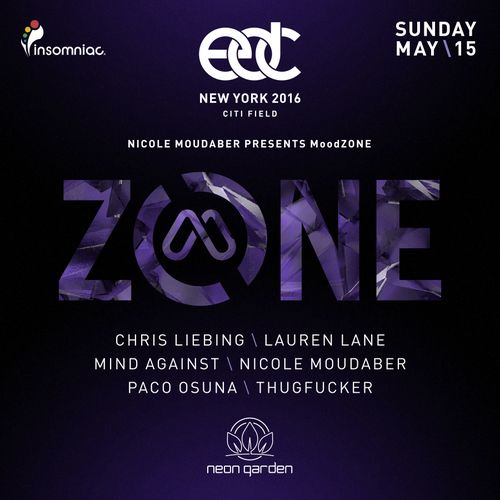 Nicole Moudaber curates the best of techno talent with the launch of her own stage, Nicole Moudaber Presents MoodZONE at the fifth anniversary of Electric Daisy Carnival New York on Sunday, May 15.

Taking over EDC NY’s neonGARDEN stage, MoodZONE delivers an all-day powerhouse lineup of some of house and techno’s most admired veterans and hotly-tipped  rising stars. Step into the MoodZONE as Nicole Moudaber is joined by German techno pioneer Chris Liebing, Spanish heavy-hitter Paco Osuna, Life and Death mainstays Mind Against, New York house duo Thugfucker, and tech-house maven Lauren Lane. Fans can expect two special sets from Nicole during the final day of the festival including a back-to-back set with Chris Liebing, which is sure to be a colossal closing.

Nicole Moudaber is an event promoter, record label founder, radio host, and one of the most passionately followed DJ/producers in the world. The one-woman  army is marching her muscular take on techno all over the globe, winning fans not only with her music, but her way of being, that’s at once uncensored, inclusive, and fierce. Her weekly radio show InTheMOOD – which Moudaber hosts with her unmistakable husk-and-honey voice – is syndicated on 66 FM stations in 45 countries, commanding over 15 million listeners worldwide.

Between her brand of sold out events across the world with her ‘MoodRAW’ and ‘In The Mood’ parties, ‘MoodZONE’ establishes a new career milestone for Nicole  within the festival circuit that is not to be missed.