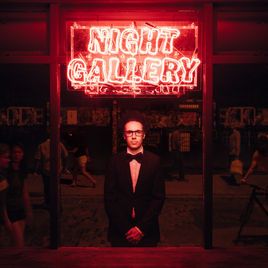 High Contrast’s ‘Night Gallery’ is the milestone 6th studio album from one of the UK’s finest electronic music artists. The long-awaited release comes as High Contrast (aka Lincoln Barrett) enjoys increasing crossover success; his last 3 consecutive tracks, ‘Questions’, ‘Remind Me’, and ‘Shotgun Mouthwash’, have all hit daytime radio playlists, and with two sell-out live performances at Brixton Academy and Electric Brixton under his belt, major festival shows this summer include Reading & Leeds, Creamfields, SW4, and NASS.

Amongst the radio anthems, ‘Night Gallery’s’ tracklist shows each musical side of High Contrast – from the Daft Punk-style house of new single ‘The Beat Don’t Feel The Same’ (feat. Boy Matthews), the Northern Soul-influenced jungle of ‘Love On A 45’, electronic indie like ‘Come Together’ (feat. Callum Beattie), rave-ready rock dance hybrids in the shape of ‘I’ll Get High’ and ‘Tobacco Road’ and future drum & bass anthems such as ‘Don’t You Go Out Of My Mind’, through to the kind of epic soundscapes favoured by M83 and Moby with ‘Save Somebody’, ‘Ambient Recovery’, and the stunning ‘The Warning’.

‘Shotgun Mouthwash’, on which Barrett performed vocals, lead and bass guitar, keys, and drums, featured on the soundtrack for ‘T2:Trainspotting’ (video premiered by Pitchfork). This marked the second time he’d worked with director Danny Boyle, the first being when he, Underworld and Boyle programmed the music for the athletes opening parade at the 2012 London Olympics – a “surreal experience” that saw him reach an audience of over 1 billion people. He was more recently chosen by Underworld to produce their latest Grammy-nominated album ‘Barbara, Barbara, We Have A Shining Future’.

His musical philosophy of ‘contrasts’ has been a staple of High Contrast’s recording career, and ‘Night Gallery’ is him “finally letting go of being tied to one genre or sound”. As someone who started in a teen hardcore band before becoming one of the most respected DJ/producers of his generation (while maintaining the straight edge/teetotal lifestyle), Lincoln has constantly experimented, and his obsessions with Northern Soul and film soundtracks (he’s a former film student) match his love for dubplate culture – often uniting these interests with his music.

‘Night Gallery’ was recorded at his own studio, and Monnow Valley Studios. Lincoln combined his studio hardware with live instruments, he’d record himself on guitar, bass, vocals, Rhodes keyboards, Moog synths, tape effects, and guitar pedals, plus sessions with live musicians and string sections, and then edit and process these recordings digitally through his studio, creating “a new hybrid between digital and acoustic with my music”.

The sought after nature of some High Contrast studio ‘magic’ has also seen him become one of dance music’s elite remixers, achieving acclaim for reworks of Adele (with ‘Hometown Glory’ and ‘Hello’), White Stripes, Kanye West, and London Grammar.