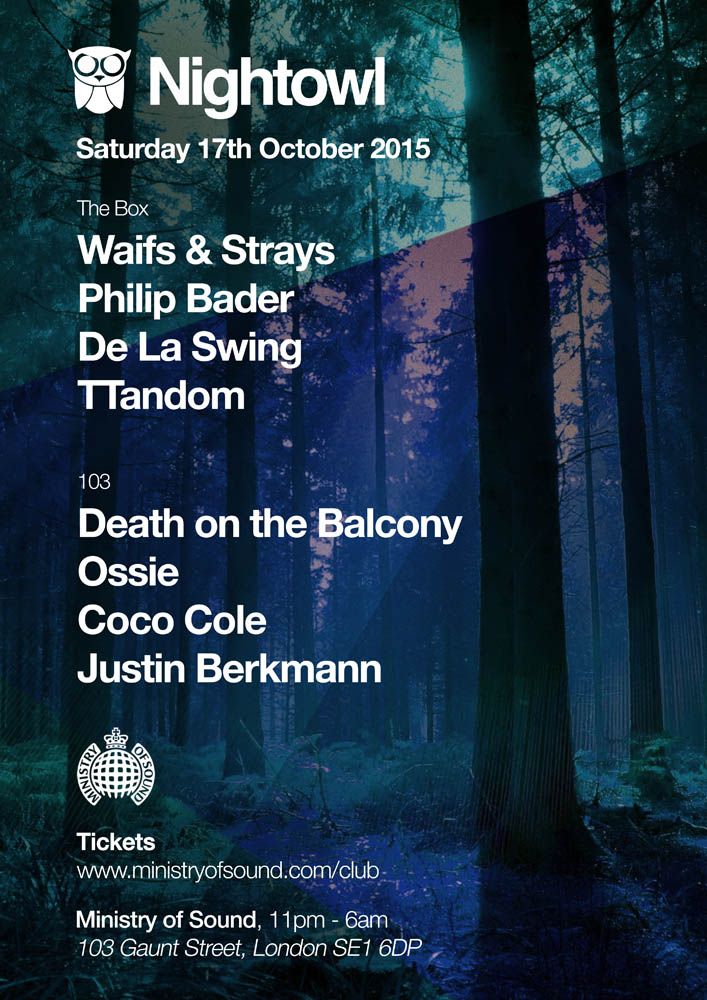 Nightowl returns to Ministry of Sound on Saturday 17th October with some of the hottest names in house and techno including Waifs & Strays, Philip Bader, De La Swing, Ttandom, Death On The Balcony, Ossie, Coco Cole and Justin Berkmann.

Operating in London, Bristol, Brighton, and Reading, Nightowl is responsible for bringing some of the biggest underground DJs to large venues and warehouse parties, and this night promises to deliver an achingly cool big room soundtrack for the discerning music lover.

Headlining will be Bristol-based DJ and producer Amos Nelson aka Waifs & Strays. He has exploded across the house scene over the last few years with releases on Kerri Chandler’s Mad Tech Records, Skream’s Of Unsound Mind label, and Luke Solomon’s Classic imprint. He’s also played a slew of high profile club and festival dates this year.

Next up on the bill we have Berlin’s own Philip Bader, whose productions have seen releases on Monika Kruse’s label, Electric Avenue, as well as Kindisch, Saved and Moon Harbour. His sound is characterised by deep, minimalistic techno and creatively placed vocals, often sampling his own voice, while Philip’s DJ sets are like his productions: deep, playful and powerful.

Joining Amos and Philip in The Box will be De La Swing. Over the past 5 years De La Swing has shared turntables with the likes of Marco Carola, Loco Dice and Richie Hawtin, to name a few. Since 2010, he has been a cornerstone of Elrow, the after-hours party specialising in huge productions, based in the ever-growing electronic hub of Barcelona, while also hosting Saturdays at Space, Ibiza.

Rounding off this incredible line-up will be Nightowl residents TTandom, who return to Ministry of Sound following their epic set at the club earlier on in the year. Expect deep, groovy and acid house at its very best.

Over in 103, Death on the Balcony, Ossie, Coco Cole and Justin Berkmann bringing a variety of deeper house, techno and disco sounds to the night.